Could you tell us about the performance of the natural resources and environment sector in 2016-20?

The natural resources and environment sector has faced very difficult and turbulent times over the past five years. The fields the sector managed faced unexpected things, especially the field of environment. Environmental incidents occurred in different areas and different projects. The most serious incident is believed to be the marine environmental pollution in four central provinces caused by Formosa.

Besides, other fields such as land management are always among hot topics with a lot of complaints from the people. The illegal exploitation of mineral has also still occurred and the mining process has caused environmental problems, including waste after mining.

The impacts of climate change increased and became more serious over the past five years. Extreme weather occurs across the country, such as extreme cold, landslides, flash floods in the northern high mountainous provinces, droughts in the south-central and Central Highlands, as well as saltwater intrusion in the Mekong Delta due to the double effects of climate change and the water use of countries in the upstream Mekong River.

To fix the situation, myself and other officials and staff of the ministry have wholeheartedly focused on solving problems.

However, the Party and the State have also assessed 2016-20 was a transition period - from the old period with the policy of all for economic development to a new period – developing the economy together with environmental protection.

Also since 2016, we began to move into a new period. The Government and the Politburo have had guidelines to develop new policies towards economic development without affecting the environment. This is also a very important lesson for the management of natural resources and the environment. The lesson is that if we still hold the policy of developing the economy first and fixing environmental issues later, we will have to pay a very expensive price.

The ministry has contributed VND950 trillion (US$41.1 billion) to the State budget over the past five years. In 2020, revenue from land-related fields was double compared to 2015.

As you mentioned, there have been a number of environmental incidents, including Formosa, over the past time. After these painful lessons, how has ministry adjusted its management policies and mechanisms?

After the lessons, we determined we have to carefully consider the investment policy and development planning in the process of verifying an environmental impact assessment.

Second, we clearly define the responsibilities of businesses in the investment process so we can assess, forecast and identify possible impacts, especially emissions, wastewater and solid waste; closely monitor waste sources and take into account technical solutions to prevent environmental incidents. We also categorise 17 industries, identifying the scale and nature of hazard of each industry and thereby defining cases for special surveillance.

Another important lesson is people's participation in supervision and the responsibility of local authorities. This requires projects to disclose information for people - the "eyes and ears" of the law to detect and we will promptly issue solutions.

Besides, we need stronger co-operation among ministries, sectors and localities as well as among countries in solving environmental problems. For example, in the water resources sector, more than 60 per cent of the water resources in rivers within the territory of Vietnam originate from other countries. Therefore, the management of water resources, especially for the Mekong River, needs the co-ordination of countries in the basin. For plastic waste pollution problem, this is also a global problem, it is necessary to have a global institution.

Ministries and sectors are paying attention to the programme to plant 1 billion trees, especially during the New Year's Tree Planting, launched by Prime Minister Nguyen Xuan Phuc. What will the ministry do to implement the programme?

This is the initiative of Prime Minister Nguyen Xuan Phuc, which was raised at the current National Assembly session. The Ministry of Agriculture and Rural Development is the agency responsible for forest protection and development. However, from the perspective of the Ministry of Natural Resources and Environment, we are also developing a very specific project for implementing the programme.

I hope every individual, organisation, business and locality has its own initiative for tree planting because this is a very correct initiative. I also emphasise it is time for us to change the individual's attitude towards nature because nature is facing the huge impact of economic development.

On the side of the environment ministry, we will also consider many angles to carry out the programme so tree planting is not just a movement and doesn't stop at one billion trees but also helps recover nature in terms of ecology and conserving biodiversity as well as the legacy left to future generations.

Based on different natural conditions, different trees will be planted. Trees, which will be planted in special-use forests, protective forests, industrial zones and roads, are necessary to suit each area to achieve the highest efficiency. Tree planting should be done regularly by all people and localities. The ministries of agriculture and environment need to take the lead in the tree planting programme.

What will the environment ministry do to help the country develop stronger and be more sustainable?

The things we have done over the years are just building the initial foundations for the development.

In the field of environment, we have a resolution of the Central Committee. Under the resolution, there are important policies that will be announced at the National Congress of the Party. We also have the 2020 Law on Environmental Protection, which will come into effect from January 2022.

Thus, for the environment - one of the three important pillars of sustainable development, we will focus on implementing the law, which focuses on the people - people are not only the law's implementers but also supervisors.

Climate change is becoming increasingly extreme and unpredictable. Therefore, the problem becomes how to improve the ability to more accurately forecast, give more timely warnings as well as evaluate climate change's impacts to make plans timely.

To do that, we need a specific assessment of each area in the country, especially assessments of geological hazards and set up more monitoring networks related to hydro-meteorology in each area. VNS

Communities may be granted power to monitor environmental protection activities 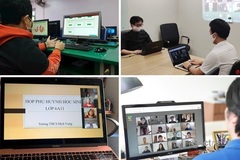