Expressing concern about the record low water level on the Mekong River, Nguyen Huu Thien, an independent expert on Mekong Delta ecology, has warned that the delta will be attacked by floods and saline intrusion.

On average, the Mekong River has total volume of water of 475 billion cubic meters a year, of which on-site rainfall just accounts for 11 percent. This means that the water level in Mekong Delta heavily depends on the water supply from the upper course. 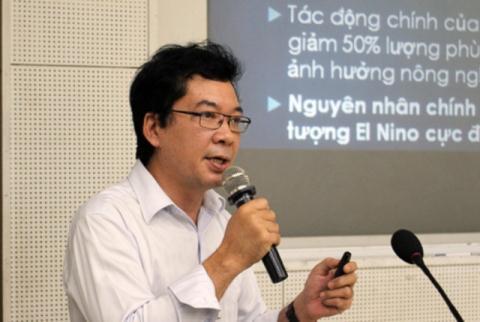 The Mekong basin can be divided into two sections. The upper course comprises the section flowing in the territory of China, while the lower basin is the section from Laos to Mekong Delta.

In the upper course, the water is mostly sourced from melted snow in Tibetan Plateau which only makes up 16 percent of total water volume. Myanmar contributes 2 percent. The other 82 percent of Mekong is from Laos, Thailand and Cambodia and Mekong Delta of Vietnam.

As such, the rainfall in the lower basin, from Laos to Thailand, Cambodia and Mekong Delta, is the most important factor that determines the water level in the delta.

Of the 82 percent, the rainfall from the left bank, or Laos, contributes up to 35 percent of total water volume, while Thailand and Cambodia contribute 18 percent for each.

The rainfall in the lower course heavily depends on weather conditions, especially El Nino and La Nina. In other words, when El Nino comes, the rainfall will be low, and vice versa.

A bulletin from the US National Oceanic and Atmospheric Administration released on July 15 shows there will be a weak El Nino which will shift into neutral ENSO in one to two months in the northern hemisphere. As such, the rainfall in Mekong basin in one to two months will be low.

Thien said scientists noted that the Mekong water level in Vientiane in Laos is at record low level compared with previous years. The level means that the floods in Mekong Delta this year will be very low and will come late, and salinity will intrude deep into the mainland.

Asked about the influences of hydropower dams on the water volume and saline intrusion, Thien said in the current state of El Nino, with little rainfall, hydropower dams will worsen the situation.

He said the hydropower dams on the Mekong block alluvium and sand, thus causing serious erosion of river banks and the coast in Mekong Delta.

The Cuu Long (Mekong) Delta province of Hau Giang plans to focus on sustainable agricultural tourism as part of its effort to lure tourists to the Mekong Delta region.