With limitless potential, solar power is expected to become the solution for Vietnam to ease reliance on fossil fuel. However, after four years of mass deployment, many problems have arisen, including environmental risks. 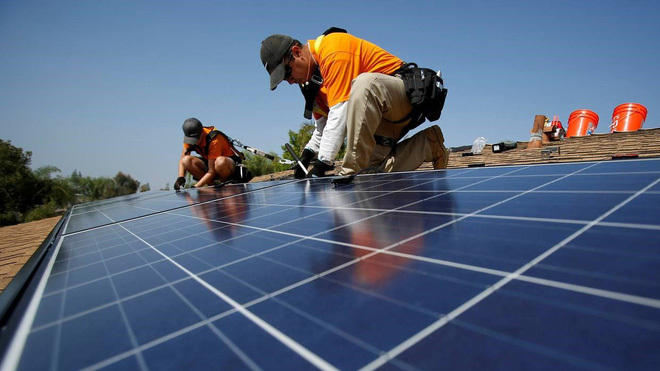 In the first half of 2018 alone, MOIT reported 272 solar power projects with total capacity of 17,500 MW, nine times higher than Hoa Binh and seven times that of Son La hydropower plants.

Experts have warned of technical and environmental problems when developing solar power plants.

Solar power is considered clean and friendly because it does not cause an impact on the climate. However, scientists warned that HF acid solution for surface cleaning of solar panels for better light reception is poisonous.

The poison, when contacting people who do not wear protective equipment, can destroy tissues and reduce calcium in the bones.

The solution applied by many manufacturers is to replace HF Acid with NaOH. NaOH is a skin corrosion agent but is still easier to handle and waste than HF.

It is more costly to collect silicon from SiCl4 than refining silicon from quartz, but it is not commonly used because the re-processing equipment is worth up to tens of millions of dollars.

Meanwhile, if it is released into the environment, it would cause soil and water source acidification.

Therefore, there must be strict regulations on the storage and treatment of SiCl4 waste.
The US National Renewable Energy Laboratory (NREL) has found methods to make polysilicon from ethanol instead of chlorine-containing chemicals, thus completely avoiding the creation of SiCl4.

Another problem that scientists have warned of is the slow development of infrastructure.

In the first half of 2019, the National Power System Coordination Center (A0) recorded the unprecedented number of 90 solar power plants becoming operational. Meanwhile, only 3 power plants successfully connected to the national grid in 2018.

The Ministry of Industry and Trade has called for a pilot scheme on realizing a bidding mechanism for solar power projects in 2020 prior to the official launch and widespread implementation of such bidding as from 2021.

The central province of Phu Yen began construction on the second stage of the first solar-powered public lighting system for the city of Tuy Hoa’s walking street, which will make it the first urban area in central Vietnam lit by renewable energy.