The Tonkin snub-nosed langur (Rhinopithecus) is one of the rarest primate species in the world and is endemic to Vietnam. 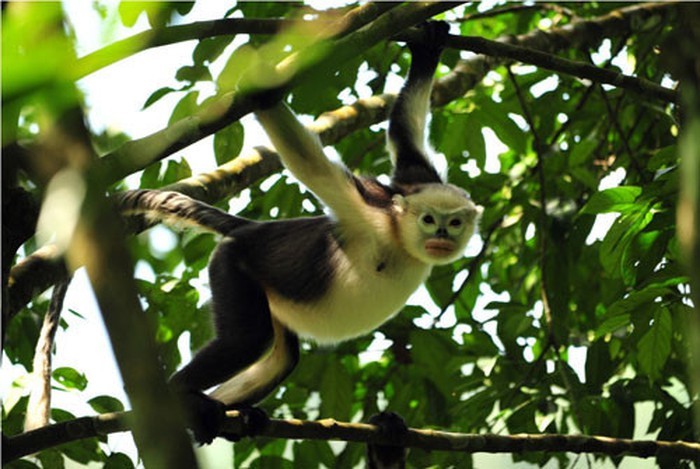 They live on tall trees due to their shy nature. Tonkin snub-nosed monkey is characterized by black fur; creamy white arms, thighs, face and head; and partial orange fur on throat. The monkey has been classified as extremely endangered in the World Wide Conservation Union's Red List of threatened species and in Vietnam’s Red Book.

In 2002, a population of up to 60 snub-nosed monkeys was found in the Khau Ca forest. Khau Ca is one of six special-use forests of Ha Giang province, with limestone karst terrain, covering an area of over 1,000 hectares, stretching over three communes of Tung Ba (Vi Xuyen district), Minh Son and Yen Dinh (Bac Me district).

Soon after that, the Tonkin Snub-nosed Monkey Conservation Project was implemented with the support of Fauna & Flora International (FFI), aiming to help this species escape extinction.

Since then, FFI has collaborated with the provincial forest protection department to carry out conservation measures - strengthening inspection and supervision to minimize impacts and threats to forests; carrying out propaganda campaigns to heighten public awareness; supporting to develop livelihood development; promoting the participation of involved parties; and carrying out in-depth studies to propose suitable conservation solutions.

Conservation experts said that the population of Tonkin snub-nosed monkeys has increased to 145-160.

Spending more than 10 years on researching and monitoring the development of the Tonkin snub-nosed langur, Hoang Van Tue, former Head of the Nature Conservation Division of the Ha Giang Forest Protection Department, said the langurs have revived and developed significantly in Ha Giang province.

Many scientists and people have discovered young snub-nosed monkeys in groups of snub-nosed langurs.

However, he said that it’s necessary to take drastic measures to protect the langurs because there is a bad impact on this primate's habitat. Roads through special-use forests have been opened, while the cultivation to exploit benefits from forests has had influence on the habitat of the langurs.

In October, the Ha Giang Department of Agriculture and Rural Development and FFI organized a workshop on the importance of snub-nosed langur protection in Quan Ba Protective Forest.

FFI’s director Josh Kempinsiki affirmed that the shift from protective forest to special-use forest in Cao-Ta-Tung area is necessary. FFI will give consultancy and support to protect the living environment for snub-nosed langurs in Quan Ba.

The central province of Quang Binh is seeking ways to protect a rare highly threatened kind of langur.