Environmentalists and scientists have expressed concern about construction projects on the Han River in Da Nang, saying that such works may affect the most livable city in Vietnam.

The Vietnam River Network (VRN) has voiced its concern about Marina Complex, a villa and marina project in Son Tra district on the east side of the Han River. The river runs across the inner city of Da Nang between two densely populated areas. 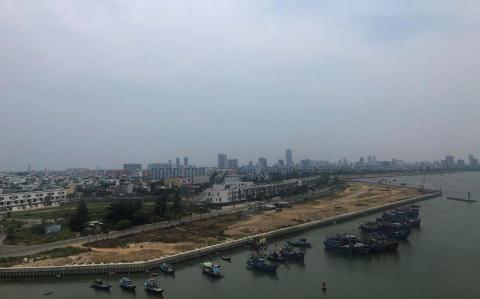 In its official announcement released on April 29, VRN said the encroachment on rivers in any form violates the 2012 Law on Water Resources, the 2014 Law on Environment Protection, the 2013 Law on Natural Disaster Prevention and the 2014 Law on Inland Waterway Traffic.

The association has also warned that encroachment on the river will change the natural flow of the river, cause landslides on riverbanks, and affect the lives of the people in Nai Hien Dong Ward. In the rainy season, rainwater will gather in sunken areas, and will not drain, thus causing flooding.

“The project, if implemented, will create a bad precedent, seriously affect valuable natural resources, and affect people's lives and the sustainable economic development of the country,” VNR commented.

Huynh Van Thang, an expert on water resources, and former deputy director of the Da Nang agriculture department, said in Tuoi Tre newspaper that it is necessary to consider the project thoroughly by calculating the impact on flow, geology, landslides and sedimentation.

In principle, when water is poured into river at the mouth of the river, it will limit the current. When it rains, it will take longer to drain.

Also in Tuoi Tre, lawyer Do Thanh Nhan, former member of the Vietnam Fatherland Front Committee in Da Nang City, said the encroachment on Han River in Marina Complex project is an example of the attempt to develop urban areas without concern for natural law.

“Da Nang leaders need to check all the licensed projects to ensure the sustainable development of the city and respect for natural law,” Nhan said.

A representative of the Da Nang Construction Department told Phap Luat TP HCM that the project would not affect the river current, especially in the flood season.

He said this is an open-space project, with planned public service facilities (yacht club, marina and club house), with a 9-meter wide walking route along the river.

However, the explanation has not lifted concerns. Thanh Nien reporters discovered that seven projects are expected to rise on the river, causing concerns about the future of the river current and landscapes.

The beauty of four “masterpiece” bridges in Da Nang