Short- and long-term solutions to prevent floods in HCM City haven't been effective.

The city is easily flooded because of heavy rains or high tides. The latter are affected by climate change and land subsidence. 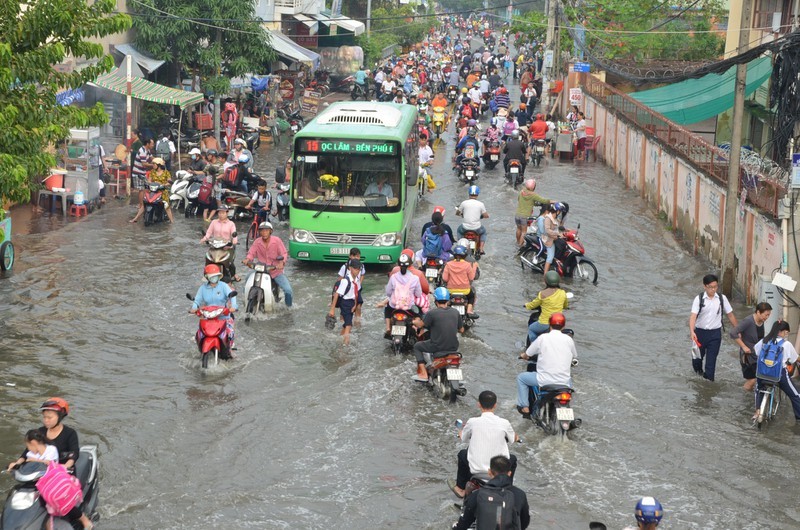 According to Mai Van Khiem, director of the National Center for Hydrometeorological Forecasting, high tides are usually caused by tidal regime in coastal estuaries and sea level rise due to wind, tropical depressions or storms.

They could also be the result of the combination of high tidal amplitude and strong northeast monsoon. The level of inundation also depends on rain, inland flooding, the drainage capability of the infrastructure, and the level of subsidence of the land surface.

Meteorological expert Le Thi Xuan Lan said the water level in the estuaries rise on days during high tide, causing the tide to peak because of the strong monsoon wind.

However, the underlying cause for this phenomenon is the subsidence of the land, excessive construction and underground water exploitation.

There are tens of ‘hot spots’ in HCM City which will become inundated in heavy rains or high tide. On October 28, a lot of roads in districts 2, 4, 7, 8, Binh Tan, Binh Thanh and Thu Duc were inundated because of the effects of a high tide spell.

Climate Central, a New Jersey-based scientific organization in late October warned that Vietnam’s Mekong Deltamay disappear in the next 30 years, and about 20 million people would be seriously affected by the sea water level rise. It also predicted that most of the area in HCM City, the leading economic center, would disappear.

However, the Ministry of Natural Resources and the Environment (MONRE) believes that the scenario won’t happen. It said the prediction of Climate Central has insufficient scientific basis and is based on extreme assumptions.

Huynh Thi Lan Huong, Deputy Director of the Institute of Meteorology, Hydrology and Climate Change, said that Climate Central used US data to correct and apply the results to all terrain around the globe. Thus, the study did not adjust for the Mekong Delta, so the terrain data in this study did not reflect the actual height of the area.

To cope with rainfall, sea water level rise and land subsidence, HCM City is discussing with Dutch experts the possibility of building multi-task dykes to prevent floods and provide water in districts 2 and 9.

Nearly VND23 trillion has been spent to combat flooding in HCMC during the 2008-2018 period, but antiflooding efforts remain ineffective.