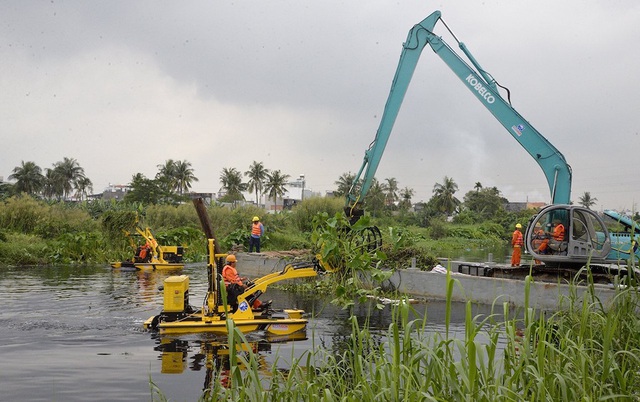 The the proposal was made by the Department of Transport to collect solid waste in Vam Thuat-Truong Dai-Tham Luong rivers. The authorities will rent the machine in November and December to clean an estimated 70ha of rivers and canals. The machine will work once every two days.

The solution has also been applied for several other rivers and canals such as Tau Hu and Nhieu Loc-Thi Nghe canals.

According to the department, the rental fee for the rubbish collecting machine alone for two months will be VND2.5bn, not including the loading, unloading and transportation charges. The rubbish will be brought to three dumping sites in Ga Vap District and then transferred to the city waste treatment centre.

There is a huge amount of rubbish in Vam Thuat-Truong Dai-Tham Luong rivers and canals which run through District 12, Binh Thanh, Binh Tan, Tan Binh and Go Vap districts. Many parts of this route have been severely polluted and boats can hardly pass through.

The city piloted the machine on Vam Thuat River on October 9 and the results were positive. After a seven-hour shift, the machine collected about 30 tonnes of rubbish, 10 tonnes more than other rubbish collecting methods which are being applied in the city.

HCM City authorities started collecting rubbish and hyacinth in the rivers and canals since 2013. However, there are many shortcomings because of lack of technology. Dtinews

HCM City has reached 12 of its 16 targets in its pollution reduction programme for the 2016-20 period, according to the city’s Department of Natural Resources and Environment.