In mid-April, Prime Minister Nguyen Xuan Phuc sent a letter to praise retailers such as Saigon Co.op, Big C and Lotte Mart for their initiative of using banana leaves to pack vegetables instead of plastic bags. 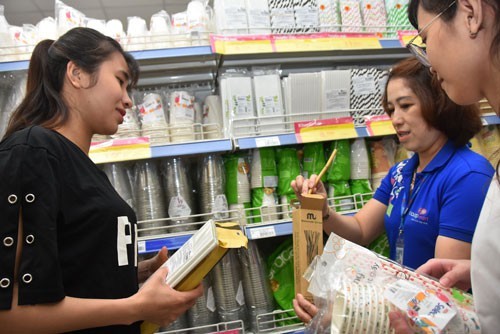 To date, 100 percent of supermarkets in HCMC have agreed to use biodegradable, environmentally friendly plastic bags, while retail chains have applied measures to restrict the use and discharge of plastic into the environment.

GO! And Big C, a subsidiary of Central Group Vietnam, sells Lohas, a kind of bag which can be used many times, at non-profit prices and encourages people to bring the bag when shopping at GO! and Big C.

The supermarkets of the chains don’t sell plastic straws and try to use biodegradable plastic bags made of maize and potato powder. However, a representative of Big C said it needs more time for consumers to get familiar with the use of packaging in banana leaves.

As for Saigon Co-op, in addition to maintaining and expanding the use of banana leaves for packing, since May 2019, Saigon Co-op’s retail chains, including Co.opmart Co.opXtra, Co.op Food, Co.op Smiles and Cheers, have stopped using plastic straws.

The chains are selling dishes, bowls, boxes and cups made from bagasse, and straws from paper and rice.

According to Do Duc Huy from Saigon Co-op, the purchasing power of the alternative products has increased by 15-20 percent compared with the time before the conversion.

Huy said about 30-40 percent of customers are aware of the need to restrict the use of plastic bags, or refuse plastic bags when going shopping. The high figure gives more driving force to manufacturers and distributors to implement long-term programs on using products made of environmentally-friendly materials.

According to Huy, some big suppliers are planning to re-use plastic bags. A group of 10 leading manufacturers in the fast-moving consumer goods industry are joining forces with suppliers to apply programs on reusing plastic packaging and using glass bottles instead of plastic ones.

Plastics companies have been preparing for shifting to environmentally friendly packaging and biodegradable packs. However, a representative of the plastics association said no member company has officially begun the program because the production cost of self-destructive packaging made of starch is three times higher than plastic bags.