Tigers are bred at farms in the border provinces in Laos before they are brought to Vietnam.

A tiger breeding farm is located in Laos 40 kilometers from the Cau Treo international border gate in Ha Tinh province of Vietnam. There are also villages specializing in illegally raising tigers and making tiger bone glue in Nghe An province, just 150 kilometers away from the border gate. 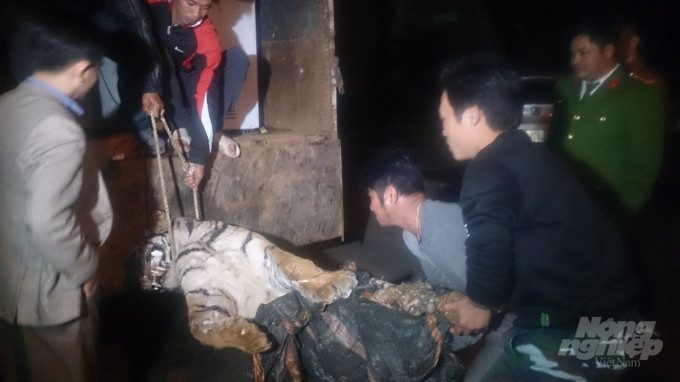 Tiger trafficking rings have reportedly established a connection between the two land areas.

Local newspapers report that many traders from Dien Chau, Yen Thanh and Quynh Luu districts keep tigers in captivity. Slaughtered tigers kept in cold storage have been discovered. The illegally traded tigers are believed to be sourced from Laos.

A tiger farm in Bolikhamsai province in Laos is a name that many Vietnamese people have heard about.

All the tigers at the farm have high quality. The feed for tigers is examined to be sure they meet nutritional standards, while the breeding method is reasonable: tigers can have sun baths and there are specific areas for them to eat and sleep.

Most Dien Chau’s traders don’t like tigers weighing 200 kilograms but prefer 100-120 kilograms. The tigers, after being fattened for one year, weigh 200-220 kilograms. At that time, the traders sell tigers for VND3-4 million per kilogram.

Oher traders like to buy 150 kilogram tigers. After shooting the tigers dead, traders will immediately inject water into the dead bodies. The volume of water is 50 kilograms on average. After that, the bodies are put into cold tanks to maintain water in tigers.

Soon after they carry the dead bodies to Vietnam, they sell the tigers immediately. In some cases, traders sell tigers at unit prices lower than in Laos, but they still can make profit because of the big volume of water injected into the tiges.

Some traders only buy infant tigers. The tigers are just 15 or 20 days old when they are sold, each of which weighs 4-5 kilograms. In Vietnam, the tigers will be fed with milk and fattened before selling.

When tigers grow, they are fed with a weight gaining drug, which makes them want to eat 15 kilograms of chicken and beef a day. Just after one year, the tigers will weigh 150 kilograms.

People prefer big tigers because they think they can make more bone glue. However, in fact, the tigers are just one year old, so the quality of the bone is not high.