Hundreds of households in Hanoi suffer from overloaded dumping site

Over 500 households in Lien Phuong Commune, Thuong Tin District, Hanoi, have reported a dumping site to the local authorities multiple times after living over a year with pollution. 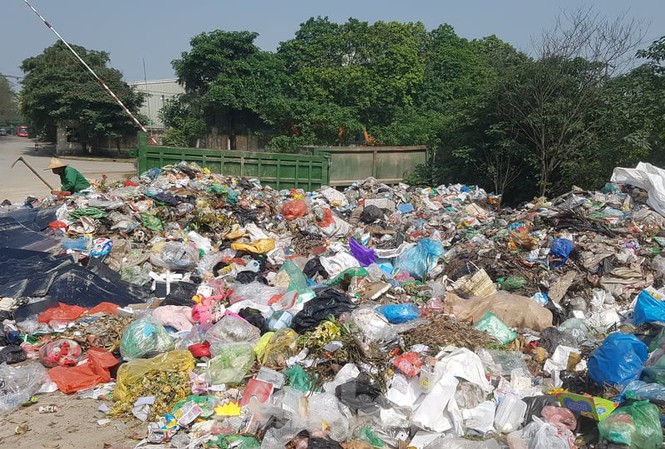 The locals also sent a letter to call for help to Tien Phong Newspaper.

Do Thi Huong, the representative for the households said they had to close the doors and windows carefully before they dare to start eating. The children also have to close all doors and wear face masks as they study in their rooms.

"Maybe the dumping site is why many people living in Le Dai Hanh Alleyway have health troubles including itchy skin and respiratory issues. Recently, several people have died of cancer," Huong said.

The dumping site is 200 square metres but doesn't have a sewage system. The black water leaked out from the garbage and pooled everywhere.

Uong Van Hanh, chairman of Lien Phuong People's Committee, said a cooperative used to be responsible for collecting rubbish in the area. But in May 2018, the responsibility was transferred to the management board of the district projects. Hanh said they weren't aware that rubbish trucks from other communes dumped rubbish there without permission, causing overloading.

"In all official directives issued by Thuong Tin District authorities, the responsibility of each unit was mentioned. Lien Phuong communal authorities are directing managing the area so they should have measures to deal with the problem. They can't say that they have given everything to us and that's it," he said.

He went on to say that the lack of strict punishment is also why violators are flouting the rules so openly.

"When violations were found, we reported to the district and communal police but the punishment didn't show any effects. Sometimes, the illegal rubbish truck had already gone when the police arrived," Tien said. Dtinews/Tienphong