In HCM City, the highest area is the most flooded

Many residential quarters and roads east of HCMC located in districts 9 and Thu Duc, in the highest area of the city, have been the most flooded this rainy season. 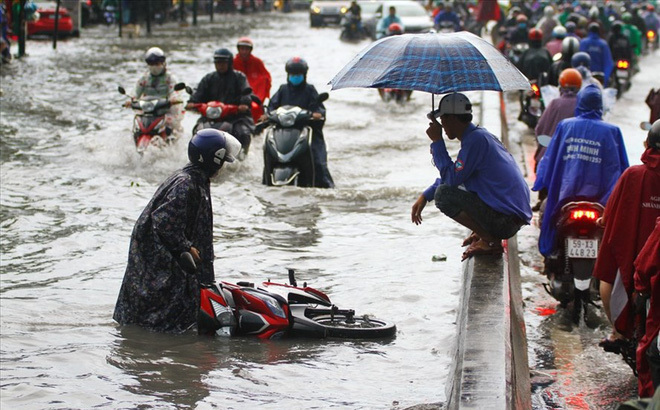 After 30 minutes of heavy rain, Pham Van Dong road in Linh Dong Ward was under water. Even houses with high foundations were inundated.

Nguyen Van Binh, a local resident, complained that his house is flooded every time it rains heavily. “No one can explain why such a beautiful and heavily invested road can flood because of slow drainage,” he said.

District 9 authorities said though situated in a high area of the city, floods occur in some low-lying areas.

There are more than 100 road sections in the district which do not have drainage systems.

And 800 alleys do not have small outlets that link to large sewer systems or to canals.

The prolonged flooding is attributed to inadequate investment.

Two anti-flood projects have been implemented for Do Xuan Hop road, capitalized at VND400 billion. However, nothing has changed. This is because the project on upgrading the canal system has not been fulfilled.

The same situation can be seen in Thu Duc district. Nearly 40 percent of major routes in the district still don’t have sewers.

The Urban Infrastructure Center which manages and operates the drainage system in HCMC believes that Pham Van Dong Road floods because the sewer system is weak. Also, the project on improving drainage system initiated by the Thu Duc district People’s Committee has not been implemented.

According to Ngo Viet Nam Son, an architect, the drainage not only depends on canal or sewer systems, but other factors.

“The areas with hot urbanization such as districts 9 and Thu Duc have been developing rapidly without careful planning, so they are prone to flooding,” he said.

River erosion and high tide have made great impact on dwellers’ lives and production; accordingly, HCM City authorities have drawn up embankment construction projects to regulate water level and drainage.

HCM City authorities have promised that the VND10trn (US$430.8m) anti-flooding project will be operational by mid-2020 if everything goes smoothly.