“I bought the iPhone XS Max at VND33 million. The shop where I bought it now values it at VND21 million. So, its value has dropped by VND12 million after four months of use,” Minh Long in Cau Giay district, Hanoi, told reporters. 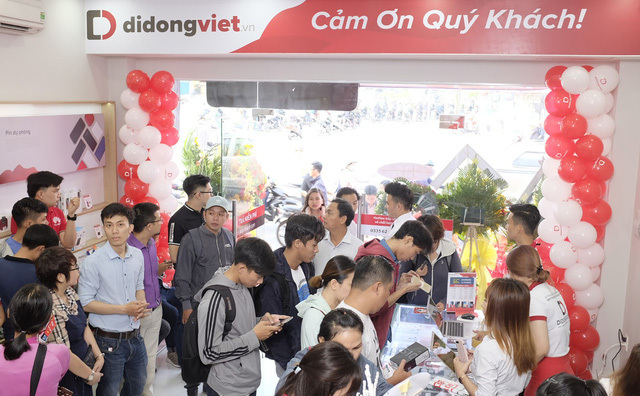 Though the value of the phone decreases more sharply than thought, Long still decided to ‘say goodbye’ to it and ordered an iPhone 11, the next-generation iPhone which was launched some days ago through the trade-in service provided by the shop.

Long said he decided to use trade-in service because it is simpler than seeking to sell the XS Max and it is more economical for him than buying a brand new iPhone 11.

Meanwhile, Ngoc Anh on Kham Thien street, Hanoi, feels satisfied about trade-in service. She bought an iPhone XS Max 10 months ago at VND29 million, but the product is still valued at VND20 million, which means that she only needs to pay VND14 million more to obtain an iPhone 11.

“The deal is good. I just lost VND1 million for every month of use, while I always can use the latest-generation iPhone,” she said.

Apple this year stepped up the program of collecting old iPhones in exchange for iPhone 11. The program has only been applied in some markets, not including Vietnam. However, after the launch of iPhone 11, many shops in Vietnam began imitating the program and providing trade-in service as a measure to stimulate demand.

A shop in HCMC accepts old-generation iPhones, from iPhone 6 to iPhone XS Max, in exchange for iPhone 11. The products were distributed officially through authorized resellers, or unofficially through private shops, and could be old or new. However, they must be activated, with good touch screen and they must escape iCloud.

The shop will consider different factors, from appearance to features, to assess them. In general, iPhone XS Max are VND19-22 million, iPhone X VND13-14 million, iPhone 7 and iPhone 8 Plus VND4-11 million.

Meanwhile, older-generation models such as iPhone 6S are less than VND3 million, depending on memory and status of machine. Customers will have to pay additional money to obtain iPhone 11, Pro or Pro Max.

Some shops even collect machines with broken screen or other problems, but the devices' value is half as much as the devices with good operation.

Huy Tan, the representative of a big retail chain in HCMC, said collected iPhones will be examined and classified for reselling. The devices with bad accessories would be sent to the manufacturer for accessories replacement before they are resold.