Is Facebook refusing to block 'dirty ads' in Vietnam?

Many users in early July complained that they regularly saw ads for branded smartphones at astonishingly low prices. All the products were counterfeit. 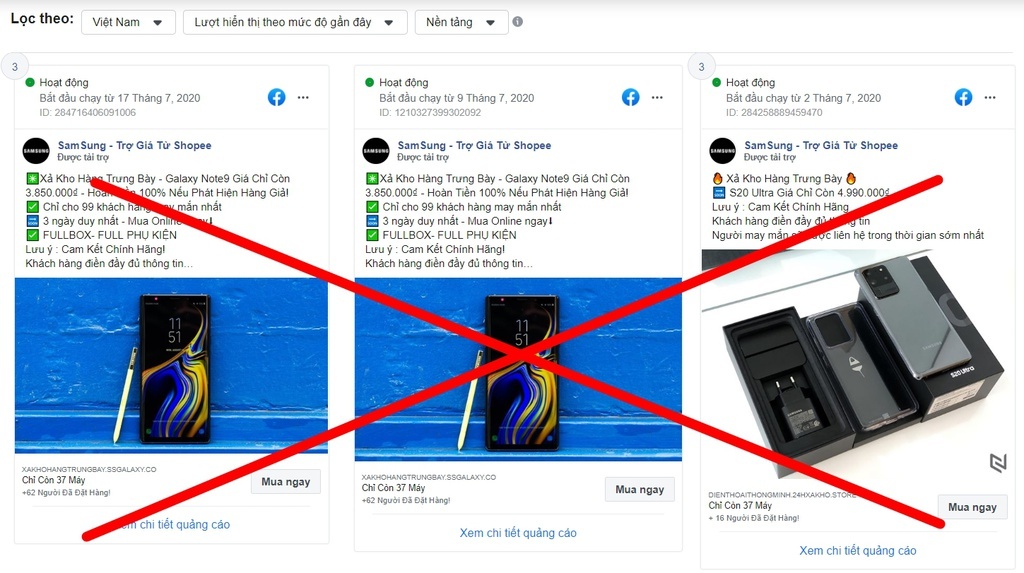 “Very attractive price for 289 first orders of the day: just VND4.5 million for Note10+. 12-month warranty, 1-for-1 exchange within 30 days at The Gioi Di Dong and Dien May Xanh chains,” said an ad running on La***a_voucheruudai since July 11.

A representative of Lazada affirmed that many fanpages fake the brand of its e-commerce website. And to make it more persuasive, the fanpage usually posts articles about Lazada Vietnam.

“It is really difficult to discover that this is a fake page. Everything on this fanpage is copied from Lazada’s genuine page. The posts advertising fake products are hidden and they are only visible to targeted clients,” said Minh Hiep, an advertiser in HCM City.

Nguyen Manh Hai, the owner of a shop in district 10, said with the price of below VND5 million, the Note10+ advertised on this page cannot be a genuine product.

Large retail chains now quote the price of VND20 million for a brand-new Galaxy Note10+, while used products are priced at not less than VND13 million.

Besides La***a_voucheruudai, there are hundreds of other fanpages counterfeiting big brands and buying Facebook ads to approach more consumers.

Shopee said the company has been working directly with units that operate social networks to block and remove websites and accounts counterfeiting Shopee. It has also joined forces with cybersecurity agencies to give information and deal with violators of business laws.

Meanwhile, The Gioi Di Dong (Mobile World) commented that Facebook is slow in solving the problems related to brand counterfeiting.

According to Phong, The Gioi Di Dong has a legal division in charge of finding administrators of counterfeit pages and giving warnings about the infringement. If the subjects are uncooperative, the company settles the problems through legal procedures. However, the number of counterfeit pages has been increasing rapidly.

The representative of Lazada said such counterfeit pages have been increasing. Lazada checks daily and reports to Facebook. However, as it is too easy to create a Facebook page and buy ads, it seems that anyone can counterfeit brands.

Abuse of social networks to post or share false information will carry fines of 10 million – 20 million VND (430 – 860 USD), according to a decree recently issued by Prime Minister Nguyen Xuan Phuc.