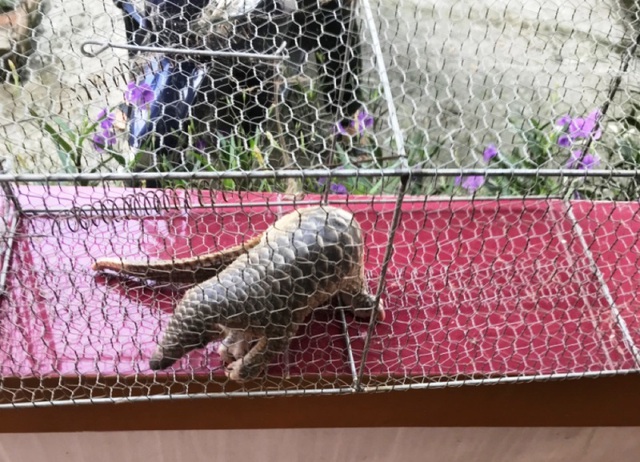 Le Duc Sau, vice head of the Binh Dinh Province Department of Forest Protection, said on April 22 that they had transferred a Javan pangolin and a Phayre's langur to the rescue team of Save Vietnam's Wildlife (SVW).

The Javan pangolin is currently considered to be critically endangered. It weighs 0.5kg and hasn't matured. Huynh Nhat Trinh from Nam Tuong 1 Village, An Nhon Commune, voluntarily gave the pangolin to the department on April 20. However, the department doesn't have the equipment and infrastructure to keep the pangolin so they transferred it to the SVW.

The langur is also a critically endangered species. It also hasn't matured and only needs milk. It weighs 0.7kg. Chuan said a minority ethnic man caught it while working on the field. He asked the man to give him the langur and then brought it to the authorities.

Three captive bears that were kept on a farm in the northern province of Nam Dinh were taken to the Vietnam Bear Rescue Centre in Tam Dao National Park, Vinh Phuc Province on Tuesday.

After more than three days of reconnaissance, the Forest Protection Department’s taskforce on March 15 carried out a secret tracing of the largest "special bird zone" in the province of Long An.