Coal and cement dust are upsetting locals in Kinh Mon of the northern province of Hai Duong, the land with romantic rivers and mountains. 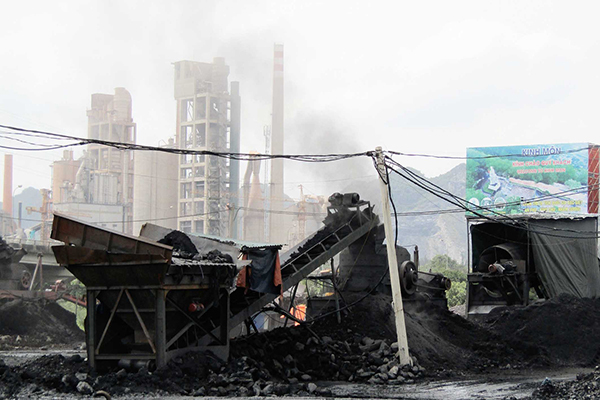 Surrounded by three coal processing facilities, the shipyard is covered by a "cloud of dust". The dense dust coal made the air gloomy. The toxic dust is the major reason behind tuberculosis.

“You see, we are sitting in a room with closed door and windows, but we still have to wear protective masks,” she told reporters. When she opened the back door of the office, a gust of wind with coal dust and the howl of machines rushed in, which forced her to close the door.

Pointing to the broken glass windows and the debris of coal scattered on the floor, Mat said when the coal processing workshop sorts coal, coal lumps rush over like hail, breaking windows and assets and threatening the shipyard’s workers.

The room where director Nguyen Van Suong worked was also full of coal dust. Suong complained that he lodged complaints to many agencies, but nothing has changed. The indifference from appropriate agencies has caused many workers to quit their jobs, while the shipbuilder is experiencing difficult days because of the productivity decrease.

The coal yard of Minh Duc Company is not the only one in the area causing serious pollution. Local people have to live with pollution caused by Song Han and Duc Duong coal processing facilities as well. This has raised a question if authorities are covering up the problem.

Nguyen Xuan Ha, head of the agriculture sub-department, said in August, the district authorities set up an inspection to examine and impose a fine on a series of coal and building material yards in the locality.

However, according to Dien Dan Doanh Nghiep, the decisions on imposing administrative fines showed that companies were fined because of violations that obstructed the flow, not because of the pollution caused by the companies.

Reporters found that the coal gathering ground of Song Han Company did not have an environmental impact assessment. Song Han did not apply measures to prevent polluted water from reaching Kinh Tay River. The coal dust spread out into the air during the sorting.

Many studies in Hanoi have shown that heat inversion is one of the main causes for recent sharp rises in pollutants, according to the Ministry of Natural Resources and Environment (MoNRE).