Made-in-Vietnam robot made from waste

After graduating from University of Economics - Technology for Industries in Hanoi in 2013, Luu Tuan Khanh stayed at the university to work as a lecturer. During that time, he nurtured the dream to make a robot. He then decided to quit his job to have more time to realise his dream. 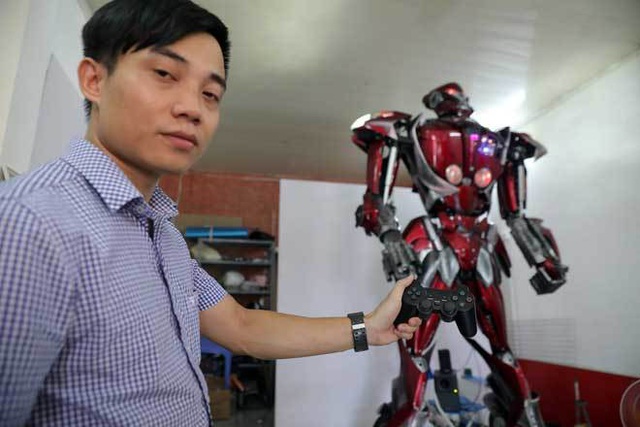 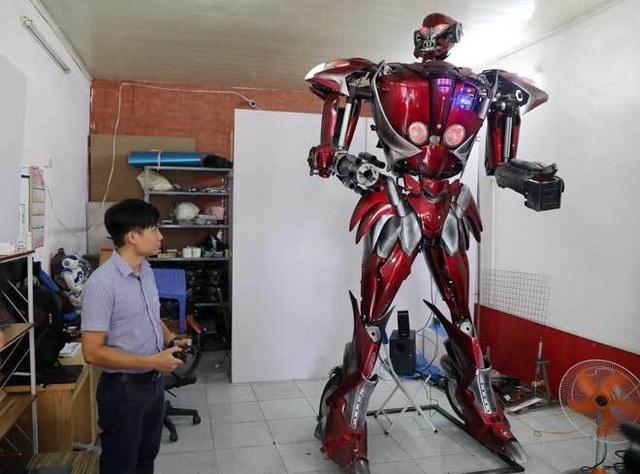 Khanh and the robot

Khanh has had a passion for robots since when he was small. He used to see robot programmes and drew robot pictures.

He still keeps a book of the pictures of his favourite cars and robots collected by him since when he was at nursery school.

He faced his parents’ opposition when he stopped working as a lecturer to pursue his dream. Khanh used his entire savings for his Robot Bank project.

Because of the increasingly growing challenge of environmental pollution, he decided to make a robot from old vehicle parts in November 2018. Some months after that, he co-operated with some friends who are also from University of Economics - Technology for Industries on production.

Initially, the team consisted of seven members, but later, half of them gave up the work. Those who stayed with Khanh had to work part-time to ensure their life, while focusing on the robot project.

On many days, Khanh worked with his computer continuously for many hours for the programming work for the robot. With the great efforts, the group produced Robot One which weighs more than 100 kilos, is 3 metres high and 2 metres wide.

The robot is also capable of moving its hands and hips, as well as producing different audio and visual effects. It can say sentences such as “Hello everyone, I am Robot One. I am from Vietnam. I was designed and assembled by Robot Bank. I am the first version to be assembled from recycled material”.

The robot is made from spare parts of motorbikes and bikes that were collected by the team from different sources for six months.

Khanh and his friends plan to make more large-size robots with many useful functions in the future. Laodong/Dtinews

Students and lecturers from several universities in the country have made and donated robots and medical devices to hospitals and quarantine areas to serve the fight against COVID-19.

If the robot is put into operation in a large scale, it will undertake a lot of work which is being done by medical workers