Many Vietnamese among most influential scientists in the world

The list, published recently in the PLoS Biology Journal, was compiled by the Metrics group of professors Jeroen Baas, Kevin Boyack and John P.A. Ioannidis from Stanford University (USA).

Many foreign scientists who are working at Vietnamese universities such as Duy Tan and Ton Duc Thang are also on the list.

The scientists are divided into 22 scientific fields and 176 disciplines and specialties. 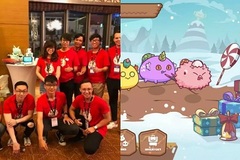 Startup Sky Mavis with the game Axie Infinity has surprised the Vietnamese startup community when it reached a huge total market capitalization - US$2.4 billion - after three years since its release, a record time in the Asian technology world.