Thousands of people in the Mekong Delta Region have been given free freshwater to deal with the on-going drought and saline intrusion. 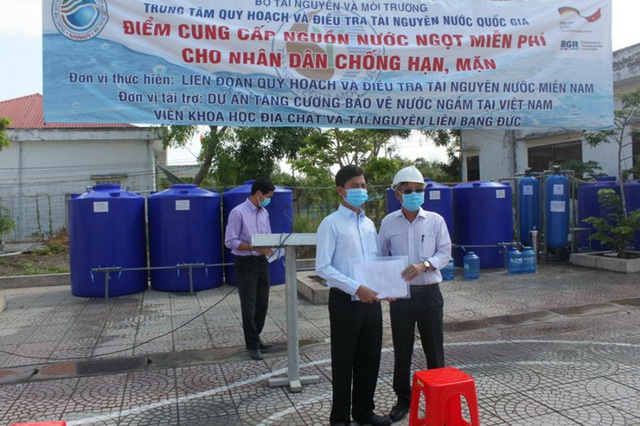 On April 11, the Ministry of Natural Resources and Environment transferred to the Ca Mau provincial authorities the free groundwater filtration system. This is part of the Improvement of Groundwater Protection in Vietnam conducted by the Federal Institute for Geo-sciences and Natural Resources and the Division for Water Resources Planning and Investigation for the South of Vietnam. The system with a capacity of 1,000 cubic metres a day will provide water to the people in Ca Mau Province.

Le Ngoc Quyen, head of the Southern Centre for Hydro-Meteorological Forecasting, said Ca Mau Province and the Mekong Delta has encountered record numbers regarding droughts and saline intrusion during the 2019-2020 dry season. There's almost no rain at all since December 2019. Ca Mau Province is at an disadvantage situation compared to other provinces since it hasn't benefited from the Mekong River. Data recorded in Tran Van Thoi and U Minh districts show that they lack over 60% of their regular water supply.

"This is a small gift from 2,900 employees in the meteorology sector across Vietnam who want to share some burden with the people in the Mekong Delta," Quyen said.

Statistics from the Division for Water Resources Planning and Investigation for the South of Vietnam show that there are underground water sources under 50-380 metres deep. The water quality is good enough for daily activities. The ministry has transferred two groundwater filtration systems with a capacity of 300 cubic metres of water a day to the people in An Khanh Commune, Ben Tre Province and another one with the capacity of 1,000 cubic metres a day to Vinh Hung Commune, Ben Tre Province. A system with a capacity of 400 cubic metres a day was transferred to Tan Trung Commune, Ca Mau.

Tan Trung Commune is one of the hardest-hit by drought and saline intrusion. The communal authorities have to send water tanks to provide clean water to the households. Thousands of people from adjacent areas also come to use the water. The division will co-operate with Dam Roi District to send more water tanks to nearby communes.

In the coming time, more groundwater filtration systems with a capacity of 700, 900and 1,000 cubic metres a day will continue to be transferred to the Ca Mau and Bac Lieu provinces. Dtinews

There were heavy rains yesterday, April 13, in many provinces and cities in the Mekong (Cuu Long) Delta, bringing much-needed water to hundreds of hectares of fruits, vegetables and paddy parched by drought and a water shortage.