According to the Telecommunications Authority, MIC in 2019 told the ministry’s inspectors and local departments to join forces with the police to conduct a large-scale inspection of the management of mobile subscribers across the country in a plan to deal with telecom waste. 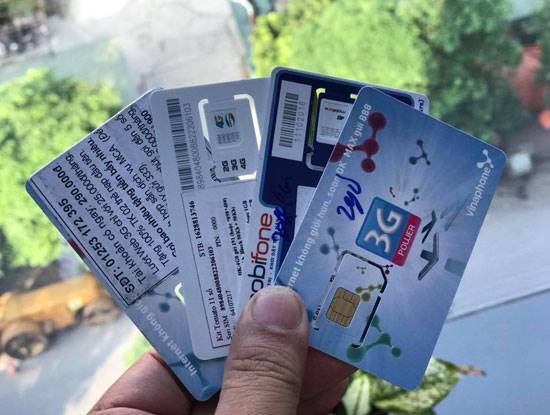 The inspectors found that the branches and service points sold ‘trash’ simcards with already-declared information of subscribers and already-activated pre-paid mobile services. Users could buy ready-activated SIMs without having to register or declare their information.

The violations were found mostly at telcos’ authorized sale agents.

Inspectors also discovered cases in which institutions and individuals had abnormally high numbers of simcards, registered many times. Telcoms had not checked to find out if the sims were used under current regulations and for legitimate purposes.

According to the Telecommunications Authority, the major problem is the lack of awareness of telcos and users.

To seek profit and compete with rivals, sales agents and individuals register subscriptions themselves, or register with the information of other people, and then sell them for profit. This causes the so-called ‘trash sims’.

Meanwhile, telcos have not conducted inspections and supervision as they were supposed to do. They offered high discount rates to sale agents to seek new subscribers, which prompted sale agents to activate and sell trash sims. Telecom service users bought these sims because of convenience and other reasons.

MIC previously had sent a document to chairs and CEOs of five mobile network operators as a first-time reminder, requesting telcos to check and punish the violators, especially authorized agents, to ensure that the supply of mobile simcards is implemented in accordance with current regulations.

Since June 1, Viettel, VNPT and MobiFone, the three largest networks, have stopped selling KITs at authorized agents and revoked the agents’ right to connect subscriber numbers. Instead, they will focus on selling sims and accept subscriber’s information registration at their telecommunication service points.

According to the Telecommunications Authority, in June 2019, it asked network operators to check and handle sims suspected as ready-activated sims, which still exist in the distribution network.

Spam messages, calls to be blocked in late 2020