Ninh Thuan to upgrade transmission network for solar power use

The tardiness in upgrading electricity transmission networks is expected to cause big losses to solar power plants in Ninh Thuan.

Pham Dang Thanh, director of the Binh Thuan Industry and Trade Department, on November 5 said the provincial People’s Committee is awaiting the Prime Minister’s decision on allowing a private enterprise to build the 500 KV transmission line which would allow use of the solar and wind power capacity in the province. 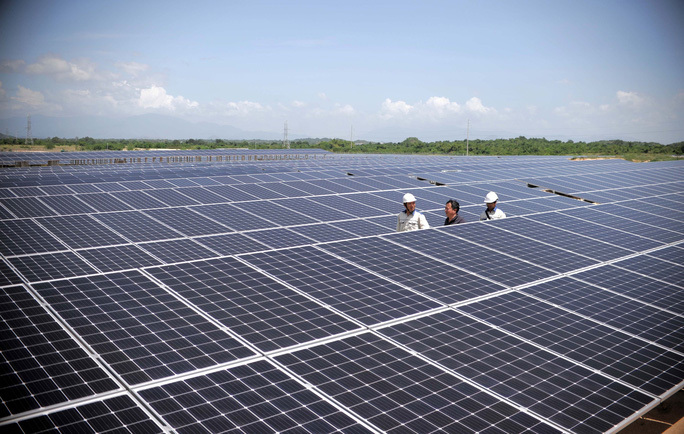 To date, 18 projects with the total capacity of 1,180 MW have been put into operation, including 15 solar power (1,063 MW) and 3 wind power projects (117 MW). However, 10 out of the 18 projects have to cut electricity generation by 60 percent to ensure the smooth operation of the transmission network.

A report showed that as of June 30, 2019, the volume of electricity the plants had to cut had reached 23.2 million kwh with the total loss of VND49.5 billion. It is estimated that the figure would reach 224 million in the last six months of the year, which means the loss of VND479.4 billion.

Luu Xuan Vinh, chair of Ninh Thuan, said if the situation cannot improve, this would cause a loss of trillions of dong, affecting both investors and the socio-economic development of the province.

According to Nguyen Khanh Duy, deputy director of Phuoc Huu Solar Power Plant, the 50 MW plant can provide 106 million kWh a year to the national grid, enough for 58,800 households’ use. However, the plant has to cut electricity generation by 60 percent from 10 am to 2 pm.

“With the current capacity, we just have enough money to pay bank loan interest, but we still cannot take back the investment capital. We are facing big difficulties,” Duy said.

Vinh, at a working session with Deputy Prime Minister Trinh Dinh Dung, reported that most 110 KV and 220 KV transmission projects are going very slowly. Meanwhile, Ninh Thuan needs to use all the capacity of 2,000 MW of solar power plants.

To settle the problem, the provincial authorities asked Dung to approve the project to build a solar power plant and a 500 KV transmission line registered by Trung Nam Investment and Construction JSC.

According to Thanh, the Ministry of Industry and Trade has asked the Prime Minister to approve the Trung Nam – Thuan Nam Solar Power project and the 500 KV transmission line.

Many households and enterprises in Vietnam have proposed continuing the solar power purchasing price at 9.35 cent per kwh, as applied before June 30.

The solar power boom in Vietnam is bringing benefits for Chinese suppliers and contractors in engineering, procurement, and construction participating in the value chain, but are urged to be cautious in choosing suitable and reliable partners.