According to Tai Nguyen & Moi Truong, in late June, the Quang Ngai provincial agriculture department released a report on the investment procedures of the Tra Khuc River downstream dam, warning of the lack of technical solutions to the system of collecting, treating and draining waste water for the central area of Quang Ngai City and neighboring areas, and the lack of an environmental impact assessment (EIA). 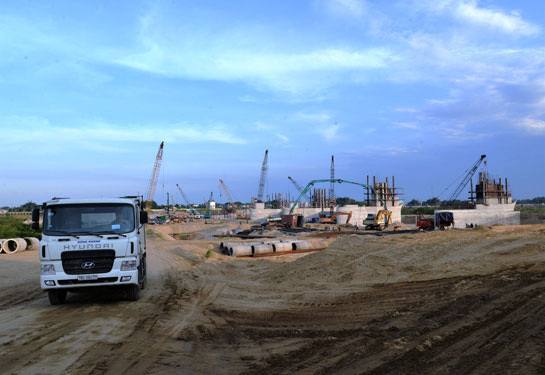 Huynh Trong, a programing and civil engineering expert, warned that the consequences may be extremely serious. If the project is completed without any technical solutions to the waste water collection and treatment system for Quang Ngai City, water will flow back to the city, which means the city will have to deal with waste water and pollution.

Thousands of hectares of agricultural land on the river banks will also be inundated. How will farmers get land for production?

According to Trong, investors must prepare environmental impact statements by a professional unit with experience before they design projects.

“In this case, there was no EIA when the project was approved and the EIA was only provided after the approval,” Trong said.

“Meanwhile, the EIA was implemented by an incapable company with lack of experience,” he said.

The project is also facing a lack of money. Contractors still have not been paid for the work they have implemented.

“The tardiness in capital allocation has resulted in contractors being owed tens of billions of dong and they may have to stop work,” a contractor said.

It is an extremely important project and contractors have to fulfill a certain workload before the flood season comes.

The rainy and flood season is expected in Quang Ngai in several months with extreme weather predicted. Construction items of the dam project remain unfinished.

Many experts have expressed concern whether the project can cope with the power of water in the flood season.

“The floods in China and India are very complicated because of climate change. In Vietnam, the floods are unpredictable. Therefore, it is necessary to reassess the project scientifically and carefully,” said Nguyen Hoang Ngan, an engineer.

“If not done properly, the work may drift into the sea,” he warned.

The Tra Khuc River Dam project was approved in April 2004 and construction kicked off in September 2010.

Erosion along river banks in the Cuu Long (Mekong) Delta province of Dong Thap has caused more than VND8.2 billion (US$353,800) in property damage this year, according to the province’s Irrigation Sub-department.

The fatalities in serious flooding and landslide caused by prolonged torrential rains over the past few days in the northern mountainous province of Ha Giang increased to five as of 15:00 on July 21,