The Ministry of Natural Resources and the Environment (MONRE) chose water environment in river basins as the focus for its research in 2018.

MONRE’s Deputy Minister Vo Tuan Nhan, who instructed the compilation of the 2018 national environment status report, said environmental incidents and water resource disputes related to rivers in recent years have had a big impact on the socio-economic development of localities. 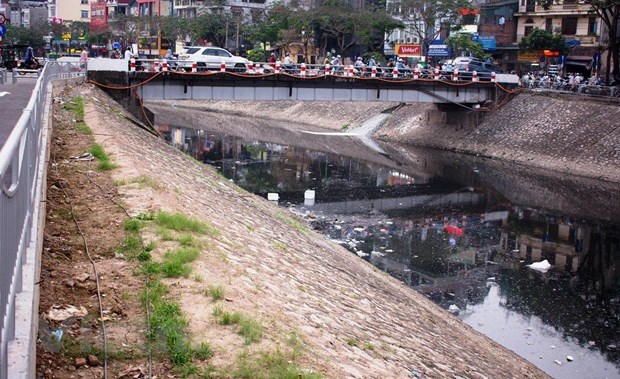 The 2018 national environmental status report identifies challenges to water protection in river basins and proposes solutions to control and treat water pollution in the coming time.

As of July 2018, there were 4,000 waste sources entering the Cau River basin, of which 3,555 were from production facilities, 144 from industrial zones, 238 healthcare units and 140 craft villages.

The biggest sources of waste are from the provinces of Thai Nguyen (1,095), Bac Giang (799) and Bac Ninh (983). Vinh Phuc and Bac Kan are the two provinces with fewest waste sources.

As for the Nhue-Day river basin which runs through Ha Nam, Nam Dinh, Ninh Binh, Hoa Binh and a part of Hanoi, MONRE found 1,982 waste sources, including 1,662 from production workshops, 39 from industrial zones, 137 from healthcare centers and 144 craft villages.

Domestic waste water accounts for 65 percent of total waste water, of which Hanoi alone discharges 150,000 cubic meters a day to To Lich River.

MONRE reported that by 2017, the total volume of waste water reached 100 million cubic meters a day, most of which is from domestic and industrial waste.

Domestic waste accounts for 30 percent of total waste water directly going to canals and lakes that lead to rivers. The eastern part of the south and Red River Delta are the two areas where most domestic waste water gathers.

Meanwhile, only 12.5 percent of domestic waste water from fourth- or higher-class urban areas can be collected and treated according to standards.

Authorities in Hanoi are considering a proposal to recover To Lich River, which was once one of the capital city’s most beautiful rivers but has been ruined by serious pollution and the discharge of thousands of cubic metres of untreated wastewater.

Authorities of An Giang Province in Mekong Delta said on Monday that erosion along the Hau River passing Vinh Truong Commune, An Phu District has become a serious issue worthy of being a "emergency situation."