The Prime Minister’s Decision 13 on solar power projects in Vietnam, which took effect on May 22, will give a push to the development of this kind of clean energy.

According to the Electricity of Vietnam (EVN), on the basis of Decision 13, power companies can sign contracts on buying electricity for projects beginning July 1, 2019. 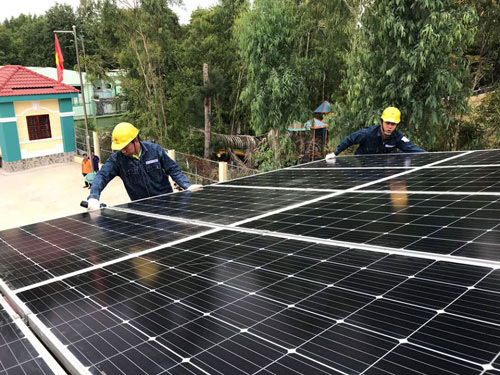 In an effort to create favorable conditions for people, while waiting for the circular that guides the implementation of the decision, the Ministry of Industry and Trade (MOIT) said the buyers and sellers can sign contracts on the basis of sample contracts.

As such, since May 23, EVN could sign contracts on electricity purchase and electricity bill payment with clients.

From 2021, the electricity purchasing price would be defined every year, in Vietnam dong, which is equal to 8.38 cent per kwh, in accordance with the official exchange rate to be announced by the State Bank of Vietnam on the last days of the previous years.

Energy experts believe that rooftop power will bring big benefits to people. It helps reduce expenses on electricity because the electricity to be generated will be put into direct use. Meanwhile, their income will increase because they can sell unused electricity to EVN.

Since the power system is connected to the existing low and medium voltage grid, this will help reduce investments in the transmission system.

Dinh Tien Minh in Hoang Mai district in Hanoi has installed a rooftop power system, worth VND40 million. Minh said using the system, he can save VND1 million a month. He expects to take back the investment capital after three years, while the equipment has the life expectancy of 10 years or more.

In order to take full advantage of rooftop power potential, local authorities have taken a lot of measures to encourage people to install the power systems.

According to Vo Ngoc Quy, deputy director of Gia Lai Power Company, more than 300 clients have registered to install solar power systems just over the last month with total capacity of 300 MWp.

In Hanoi, the city’s power company decided to give financial support to encourage people to install power systems.

Those who install the systems in 2020 will get VND2 million support in cash for systems with the capacity of less than 3 KWp and VND5 million for 3KWp or higher systems. It will also provide free maintenance service to the systems in the first two years of operation.

The Decision 13/2020 on the development of solar power in Vietnam was released by the government on April 6, 2020.

Despite the impact of the COVID-19 pandemic and many countries limiting customs clearance, solar power enterprises with manufacturing plants in Vietnam are still taking advantage of the domestic market to serve customers and sustain growth.