Vietnamese scientist devotes her life to research on filtration membranes

During the years of studying and creating filtration membranes, Ba met many difficulties. Sometimes she lacked money for research, and sometimes her health turned so bad that she could not continue the research. 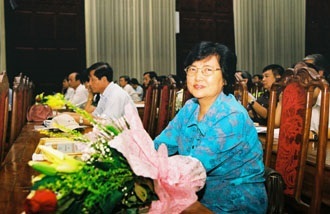 However, the difficulties did not kill the scientist’s desire to devote herself to research and gain great success in the fields of healthcare, biology and environment.

After graduating from the Hanoi National University in the early 1970s with excellent results, Ba became a lecturer at the university and her scientific research career entered a new period.

In 1975, Ba was sent to Germany as a PhD student and she began study on polyacrylonitrile filtration membranes. Within four years, Ba and her teacher had developed three inventions related to membranes.

Returning to Vietnam, she continued to promote her expertise in the field of filtration membranes. In 1980, Ba chaired a ministerial-level project on researching and manufacturing reverse osmosis membranes to freshen sea water to serve the daily needs of soldiers on Truong Sa (Spratly) Island.

The work was highly appreciated and the product had the same high quality as the one made by the then Soviet Union at that time.

In 1985, Ba applied the state-level project on blood ultra filtration to treat patients with renal impairment.

“When I came to Bach Mai Hospital, doctors told me that ultra filtration membrane is needed for people with severe renal impairment but the imported ones were expensive. The images of patients between life and death haunted me and I decided to set to work on the research,” Ba recalled.

It was 1985, one year before doi moi (renovation), when Vietnam was in big difficulties and the funding for the project was very modest. But Ba still achieved success in difficult conditions.

In the late 1990s, realizing that Vietnam had to import injectable and infusion filtration membranes at very high prices, while the country needed about 10 million liters of intravenous a year, Ba and her colleagues carried out research on making injection filtration membranes, bacterial filters and pre-filters. The project was implemented for 3 years (1999-2002) and brought good results.