The current electricity purchase price, 9.35 US cent per kwh, or VND2.134 per kwh not including VAT, will expire on June 30. Electricity of Vietnam (EVN), the only wholesale buyer, will buy electricity at prices to be set up by the Ministry of Industry and Trade (MOIT) 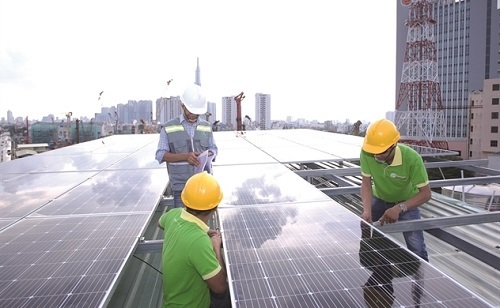 The electricity prices will be based on geographical areas and types of projects. Rooftop electricity will have the highest price of VND1,803-2,486 per kwh.

The policy prompted investors to run a race to put solar power plants into operation prior to June 30. However, as there were only 1.5 years of preparation, many investors failed to speed up.

That is why Ninh Thuan, which has the most solar power projects (29 projects have been licensed with the total capacity of 1,938 MW) has proposed to extend the deadline of the current electricity pricing policy until 2020.

At present, GEC, Fujiwara, Tri Viet and Bach Khoa A Chau are running against the clock to complete their projects.

A source from MOIT said about 1,000 MW from solar power plants would be put into operation by the end of the year.

However, Mai Van Trung, business development director of SolarBK, said that the electricity price is only ‘hot’ in the two segments of floating and terrestrial solar power because of the high investment scale.

As for rooftop solar power, which Vietnamese enterprises target and have advantages, the impact of the electricity price change will be inconsiderable.

Rooftop power developers are mostly households which install solar panel systems mostly for daily use rather than for sale to EVN. Only households living in large spaces like villas will be able to generate abundant electricity for sale.

The contract on purchase and sale of electricity between EVN and clients is still under compilation.

Observers believe that as the retail electricity price from EVN has increased by 8.36 percent and the power supply/demand imbalance continues, more household-invested solar power projects will be developed.

Trung estimated that a 3kWp solar panel system will help one family save half of expenses on electricity. Meanwhile, the cost for installing SolarGATES system has decreased to VND20 million per kWp.

A representative of SolarGATES, a subsidiary of SolarBK which holds 45 percent of domestic market share, said it plans to provide household-used solar power solutions to 3,000-4,000 clients this year.