Technology firms and telcos are believed to be doing well thanks to the higher demand for technological solutions to organize the work-from-home regime.

However, they also have to struggle to survive during this difficult period.

Software engineers at FPT Group, the largest Vietnamese IT corporation, said the epidemic has not affected their income, but they have had to work harder. 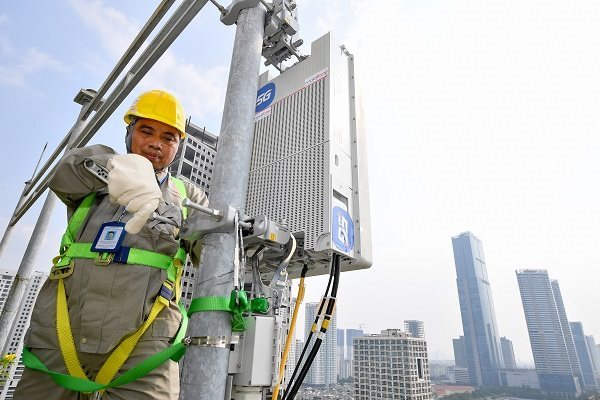 FPT has made every effort to ensure jobs for its 36,000 workers. FPT president Truong Gia Binh swore that no worker of the group would lose jobs during Covid-19.

Binh made the statement after commenting that Vietnam has been doing very well in the prevention and fighting against Covid-19. While India and China, the two largest software export centers of the world, are meeting difficulties in their efforts to control the epidemic, FPT will try to find more clients and take more orders to get money to pay workers.

Viettel has also been hit by Covid-19, but it hassn’t thought of laying off workers. President of CMC Group Nguyen Trung Chinh also said despite the epidemic, the group won’t sack workers.

In the context of the epidemic escalation, MobiFone, one of the three largest mobile network operators, predicted a decrease of VND6.684 trillion in revenue and VND1.526 trillion in profit compared with the plan.

To Manh Cuong, CEO of MobiFone, also affirmed that MobiFone will not lay off workers, though it may have to think of cutting salaries if the epidemic lasts a long time. In principle, salaries for workers are defined based on their business results.

As for VNPT, the corporation estimated the decrease of VND6.161 trillion in revenue and VND817 billion in profit. Like MobiFone, it will maintain the current staff, according to VNPT’s deputy CEO Do Dung Thai.

Some analysts believe that technology firms and telcos will make fat profits in Covid-19 because many enterprises have shifted to the work-from-home regime. Thid has led to higher demand for fixed internet, telephone contact, 3G and 4G services.

However, the firms have denied this, affirming that their revenue has decreased.

The Ministry of Information and Communications (MIC) has requested that telcos make contributions to the fight against Covid-19 by reserving internet bandwidth for online learning and distance working.

Since early April, Viettel has increased the bandwidth by two times for all FTTH subscribers, and it hasn’t chargef higher service fee. As for those people in concentrated quarantine areas, the telco offers a preferential service package for 14 days.

As such, telcos have to pay more for bandwidth rents and transmission capacity, while the revenue is expected to decrease because of many sale promotion programs.

Experts and leading IT and telecom firms shared experience and discussed the possibility of co-operation in manufacturing 5G chipsets and network infrastructure devices during a seminar in Hanoi on Wednesday.

Claims 5G harms immune systems or spreads the virus have been condemned by the scientific community.