Thanh Hoa: the ‘birds’ hell’ in Long An province

Thanh Hoa is called a "birds’ hell" because it is the area where birds, storks, eagles and wildlife are kept in captivity and slaughtered. It has the biggest wildlife market in Vietnam.

Visitors to the market can see how sellers break off wings, poke eyes, pluck hair and burn birds alive. They also can see hundreds of iron cages containing hundreds of thousand of snakes, turtles and rare and precious animals belonging to the 1B group. 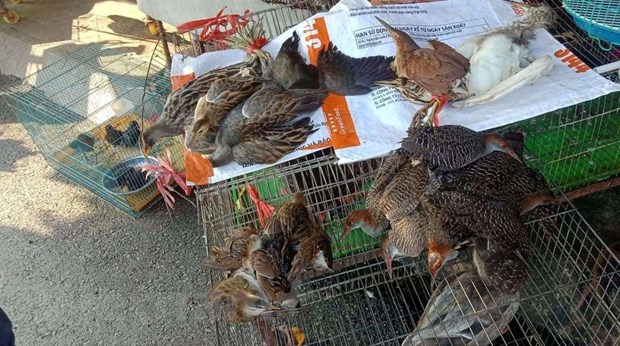 Sometimes the owners of the wildlife cages disembowel or kill the birds just by throwing boiling water on them, butchering them and then selling to visitors.

The market is always bustling and its trading scale is "extremely large" as described by Dao, the owner of a stall at Thanh Hoa Market.

Reporters who acted as buyers seeking to buy birds in big quantities to carry to Hanoi were told by Dao that she can provide products and that 100 percent of birds are wild.

“All the birds here are ‘natural’. They are caught by farmers from the fields or natural forests in the buffer zone of Tram Chim National Park and Lang Sen Natural Reserves,” she said.

Dao led the reporters to the area where there are cold stores full of frozen meat. Hundreds of slaughtered birds are kept there before they are carried away.

“We have to pay high for electricity here, VND7,000 per kwh. Therefore, we have only several cold stores here. But we have more slaughtered birds kept at the refrigerators at home,” she explained.

A man named Phong called reporters on the afternoon of the same day, saying he was having birds collected directly from hunters and could provide birds at any time.

The farmers catch the birds in the wild in southern provinces, especially in Dong Thap.

When reporters met Phong at Thanh Hoa Market later, Phong said he had just delivered 70 kilograms of birds to the shops at the market for retail.

Not only Phong and Dao, all the sellers, when asked if they could provide birds in large quantities, said they could satisfy all the orders.

A question was raised about how the wild birds can be carried to the north. “Our products can be either alive or frozen and are transported by passenger car, frozen truck and even aircraft,” Phong said, adding that frozen products arrive in Hanoi after two days.