HCM City is suffering from the ‘heat island’ phenomenon because of the reduction of greenery areas.

Since the day the nacre trees on Ton Duc Thang street in district 1 disappeared, Chung feels afraid of going from Saigon Trade Center to the other side of the street. 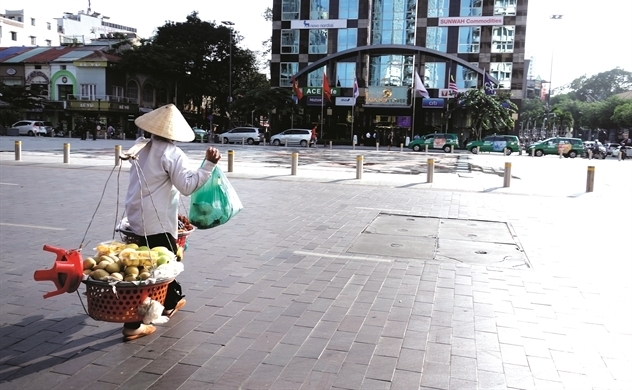 “The terrible heat from the wide road makes me shrink back,” Chung complained.

“The temperature in inner districts is 3-5oC higher than in the suburbs,” said Duong Thi Thuy Nga from the HCMC University of Natural Sciences.

In urban areas, one of the major problems is the rise in temperature, leading to the formation of an urban heat island effect. According to ADB, from 1990s to 2010s, the average annual temperature increase in HCMC was double the increase in Mekong Delta. The increase is directly proportional to the rise in the urbanization rate of the region.

A research work by Nguyen Thi Van from the HCMC University of Science and Technology in 2015 showed that the temperature fluctuation in HCMC has increased and the high temperature area is gradually expanding towards the suburbs.

The considerable decrease of greenery areas during the urbanization process has serious effects.

At 12-14 pm on hot days, the temperature gap between the earth surface and the air temperature at the height of 2 meters is up to 10oC. The reason is that the concrete surface absorbs heat more.

The temperature in the city ranges between 21 and 47oC. Meanwhile, in industrial zones in districts 7 and Thu Duc, the temperature is up to over 40oC.

A temperature of 35-40oC is mainly measured in the central area, residential areas with vegetation or sparse density, and on vacant land such in district 1, 10 and Go Vap.

The temperature of 30-35oC is measured in areas with large greenery area, grass fields and agricultural land, mostly in the districts of Cu Chi and Binh Chanh, and a part of Hoc Mon in the suburbs. The lowest temperature, below 30oC, is measured at forests, surface water and the areas along Sai Gon River.

“Green roofs can help mitigate the heat island effects,” said Pham Tran Hai from the HCMC Institute for Development Research, speaking about a model being applied at Seoul National University.

The roofs are covered with green plants, while rainwater is stored below to use for irrigation purposes. However, the barrier for this model is the large initial investment cost, according to Hai.

Another solution as proposed by Hai is greening the city by growing trees on streets and surface of high-rise buildings, which is being followed by Singapore. The greening rate in HCMC is now 18 percent, or 1/3 of Singapore's.