The path of domestic garbage in Hanoi

Hanoi has opened many sanitary waste collection points, but the capital city is still at risk of being flooded with garbage.

A report shows that 6,500 tons of domestic waste is produced in Hanoi each day, including 3,500 tons from inner districts and Son Tay town, and 3,000 tons from suburban districts. 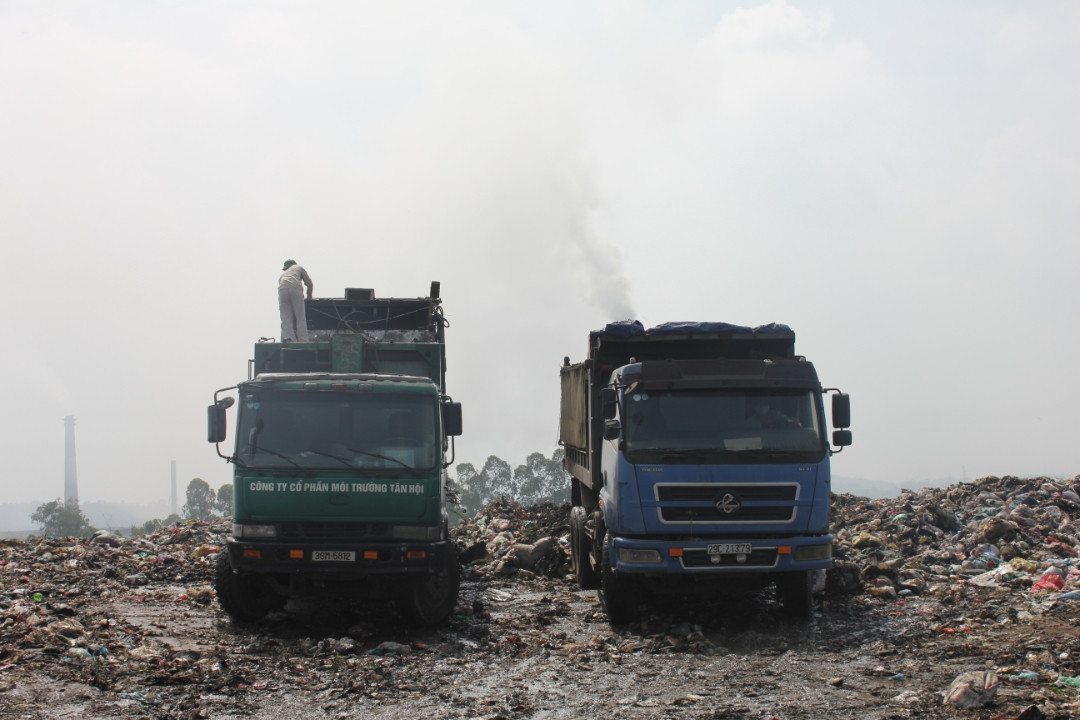 Most of the domestic waste is collected and carried to the major waste treatment complexes of the city, including Nam Son, Soc Son and Phuong Dinh, while the remaining is buried at landfills in some suburban districts.

According to Mai Trong Thai, head of the Hanoi Environment Protection Sub-department, after the municipal authorities decentralized waste collection and transport, only one unit in each locality is in charge of this.

The question is how to collect and carry garbage to the concentrated landfills of the city. There are only two major waste treatment complexes which treat waste mostly by burying – Nam Son and Xuan Son. The former receives 4,000 tons of garbage a day, while the latter 1,400 tons.

If continuing burying garbage, Hanoi’s land fund will run out by 2021. Meanwhile, if the municipal authorities cannot draw up suitable solutions for the residents in the areas near landfills, people will block garbage trucks to the landfills.

Waste collection is difficult in districts in the suburbs, due to the wide area, the high number of alleys, crowded villages, poor transport infrastructure, and big amount of waste,.

Pham Thien Loc, director of Thanh Cong Cooperative, which is in charge of collecting waste in three districts – Thanh Xuan, Hoai Duc and Dan Phuong, complained that besides domestic waste, there is cumbersome waste such as tables, chairs, beds, cabinets and furniture. It is estimated that 3-4 tons of waste contains materials with bricks and sand.

At present, garbage is gathered on pavements and road beds, which Loc finds a big problem.

Lao Dong Thu Do days ago reported that there are many landfills arising on Thang Long Boulevard, one of the most beautiful roads of the capital city. Piles of domestic garbage and waste building materials give bad odor and damage the landscapes.

3,000 tonnes of waste to be burned to create energy in Can Tho

About 3,000 tonnes of waste, which is supposed to be buried at Co Do District’s dumping sites in Can Tho City, will be burned to produce energy on a trial basis, according to local authorities.

Kristin Hughes, director of the Global Plastic Action Partnership, talks about solutions that are needed in Vietnam, which is a disproportionately high contributor of plastic pollution into the oceans.