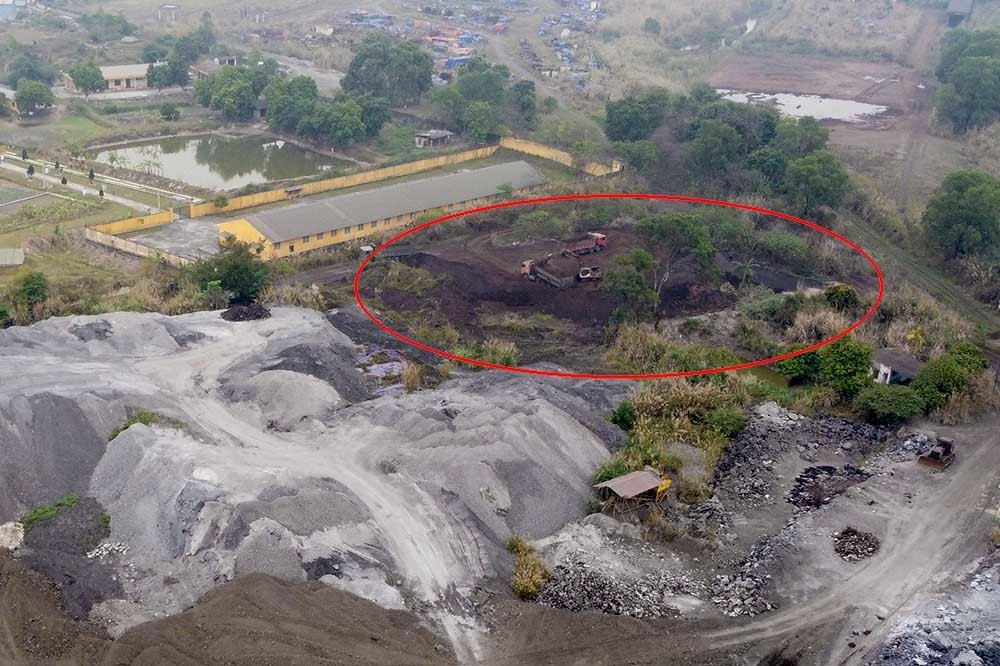 Under the government Decree 38/2015 and the Ministry of Natural Resources and Environment (MONRE) Circular 36/2015, furnace dust generated during steel refining is listed as a hazardous waste.

But thousands of tons of furnace dust are still in an open-gathering ground in the province. Looking from above, the furnace dust dumping ground is dozens of meters long and two meters high. It is located near Cach Mang Thang Tam Road, the major route of Thai Nguyen City, and near a 20-07D vehicle registration center in Cam Gia Ward.

VietNamNet reporters took photos of the tons of furnace dust in the open air with no cover at Luu Xa Mill, a branch of Tisco, on February 22.

Near the mountain of waste were pools of waste water with floating green and yellow scum on a surface area of nearly 100 square meters.

Tran Van Binh, chair of Cam Gia Ward, when asked by VietNamNet about the the waste "mountain" and wastewater pools, said the ward’s authority was only administrative management and that reporters should contact Tisco for information about the steel manufacturer’s operations.

Tisco confirmed that the amount of furnace dust is up to 10,000 tons, heaped up on the company grounds. The representative said the dust has accumulated since "before 2010".

Asked why the huge waste ground has been left uncovered in the open air, Hanh said it was covered with canvas that was weathered by wind and rainwater.

Hanh said the company recently signed a contract with Viet Bac Color Metal on collecting and treating the remaining furnace dust. The cost is VND600,000 per ton.

In late 2020, Tisco decided to build a warehousing facility to contain furnace dust. It is expected to be completed in the first quarter this year.

Trinh Van Tuyen from the Vietnam Academy of Science and Technology said that if the owners of the waste sources still cannot treat the waste, they must preserve furnace dust as a hazardous waste.

The waste yard must meet standards of permeability, layers, and cover to prevent pollution of surface and underground water, he said.

A second life for plastic waste

Nestor Catalan, a Spanish man who has been living in Vietnam for many years, is determined to spend the rest of his life working for what he deems meaningful projects. PLASTICPeople is one of them.