More time is needed to measure the effectiveness of a cancer treatment with immunotherapy, Vietnamese scientists say.

Bach Mai Hospital, one of the biggest and most modern hospitals in Vietnam, at a recent conference on the latest advances in cancer treatment, stated that it has effectively treated metastatic cancer with a new method. 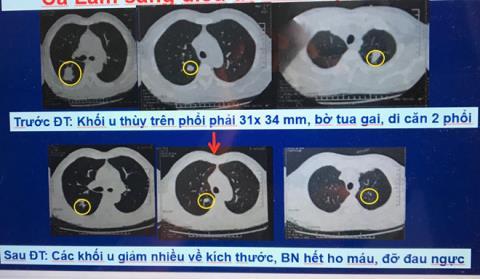 This is an immunological method for cancer treatment approved by the US Food and Drug Administration (FDA). It has been applied at Bach Mai Hospital since May 2017.

Prof Nguyen Chan Hung, chair of the Vietnam Cancer Association, former director of the HCMC Oncology Hospital, said more time is needed to measure the effectiveness of the method.

Hung said this is one of the cancer treatments that received the 2018 Nobel Prize in Medicine. Immunotherapy for cancer treatment, also known as checkpoint inhibitor therapy, has been officially adopted in many countries.

Since this is a new method, more time is needed to experiment and assess its effectiveness.

The method was officially approved for trial in 2011 and since then there have been many changes in the research and supporting medicine.

He also said the treatment depends on the each patient and each type of disease. Progress can be seen in some patients, but in other cases, patients feel worse.

Seeking patients for treatment is difficult. It is costly to apply the new treatment method and is not affordable for the majority of people.

As for the role of Vietnam in developing the new therapy, Hung said Vietnam, like other countries, has begun using the method and has gained initial achievements.

With encouraging initial results, Hung hopes the new therapy will be applied on a larger scale in modern healthcare centers.

Regarding the cancer treatment, Hanoi Medical University has announced it will bring an anti-cancer vaccine from Japan to Vietnam.

Tran Huy Thinh from Hanoi Medical University said that to create an effective cancer vaccine, it is necessary to find specific antigens.

Specific antigens depend on type of cancer and ethnicity. Vietnamese, Korean and Japanese, for example, will have different characteristics.

The university needs to find out which antigen is most specific to Vietnamese and which antigen is specific to each type of cancer. After that, with technology to be transferred from Japan, it will create an antigen to use in the vaccination method for cancer treatment in Vietnam.

Hanoi University of Science and Technology (HUST) is studying a system to support the diagnosis of liver cancer using AI to analyse ultrasound images and interpret gene data.

Cancer vaccines to be brought to Vietnam