Cars and motorcycles are among major sources of emissions such as carbon dioxide, hydrocarbons, nitrogen oxide, particle pollution, and toxins in fuel, such as benzene. These cause air pollution, especially urban air pollution, directly affecting people’s health.

Among other ASEAN countries, only Singapore has applied Euro 6 emission standards, since 2017.

Under Prime Ministerial Directive No 03/CT-TTg dated January 18, 2021 on enhancing air pollution control, the Ministry of Transport is requested to urgently develop a national programme to develop means of environmentally-friendly transport and public transport.

The PM asked for more communication activities to encourage people to use public transport and means of environmentally-friendly transport, and to promote the implementation of the roadmap for the application of the national technical regulation on the environment related to emissions from transport./. VNA

HCM City needs VND553 billion (US$23.9 million) to invest in the motorbike emission control programme in the city by 2030. Of that, the city plans to check exhaust emissions for impoverished households free of charge between 2023-2025. 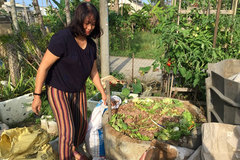