Why is air quality in Vietnam's big cities getting worse?

The air quality in large urban areas, especially Hanoi, has been rated poor or even dangerous recently.

Large urban areas, including Hanoi, on September 24 once again were lit red on Pam Air, the air pollution map. In HCMC and some suburban areas, air pollution has now decreased, but the green color indicating good air quality on the map is rarely seen. 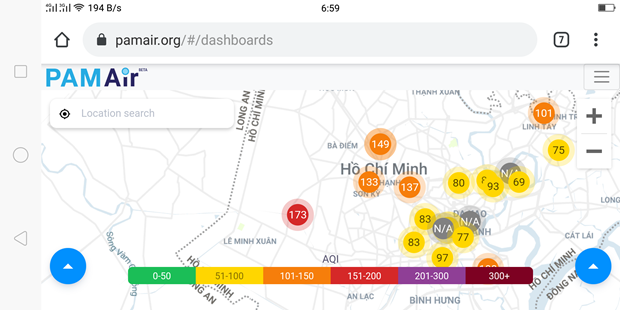 The AQI measured at the US Embassy on Lang Ha Street in Hanoi reached 204, the level harmful to human health.

The PM 2.5 index has been between 90 and 140, which is considered ‘dangerous’. At the Han Dau Monitoring Station, the AQI was above 150 for three consecutive days.

The monitoring system of the US Embassy showed the PM 2.5 index had reached a peak of 183 at one point.

At 8 am on September 24, Pam Air showed that air quality in most areas in the inner districts of Hanoi was AQI 151-175. Trang Tien Street, Vo Chi Cong, Xa Dan and Van Cao were the areas with the worst quality of air.

A report on national environmental research prepared by the Ministry of Natural Resources and Environment (MONRE) showed that most big cities in Vietnam are facing serious air pollution, with dust and smoke-caused pollution the most worrying.

Of the sources of emissions from "dirty" urban air, emissions from motor vehicles contribute the most to air pollutant emissions. The major emissions are SO2, NO2, dust (TPS, PM10, PP2,5).

In the inner city, there are still a high number of factories and industrial production workshops which still cannot be relocated to industrial zones. Most of the factories are small scale, and use outdated technologies which don’t include dust filter equipment and hazardous gas treatment.

Many studies in Hanoi have shown that heat inversion is one of the main causes for recent sharp rises in pollutants, according to the Ministry of Natural Resources and Environment (MoNRE).