American man teaches English to the poor in Vietnam

To help a child cope with destiny, it is be helpful to give them an education.

It was a beautiful weekend day. A foreign man with a white beard like Santa Claus was seen slowly cycling towards a charity house in district 10, HCM City. He was there to visit his adopted daughters. 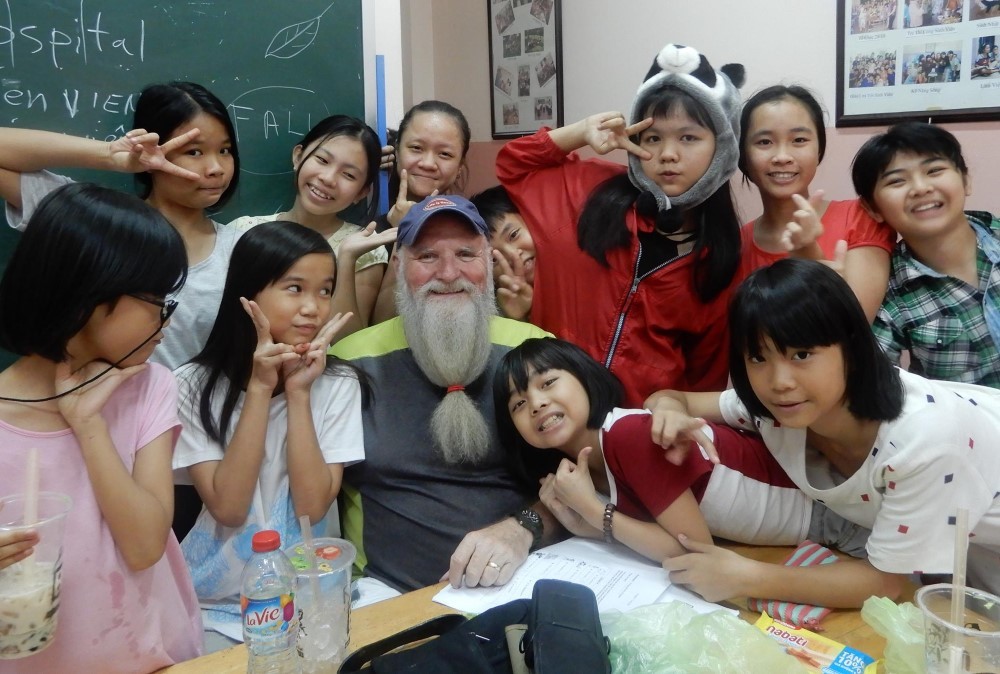 Paul Blizard and the children at the charity house

Paul Blizard found the charity facility a few years ago when he saw the children walking together.

“After meeting the children, he came to see me and expressed a wish to sponsor the activities of the charity house. He drops into the house once or twice a week, bringing soap, clothes and sweets, and teaches English to children,” said Thu, one of the teachers at the house.

“Like other children, the children at the charity house go to school and only come back to have meals and play together in the evening.

Paul believes that the most difficult children are those who need education the most. He decided to teach English to them for free.

When Paul comes to English class, he usually brings gifts, from essential things to sweets and toys. When seeing Paul, small girls rush to greet and hug him like children swooping in Santa's lap in fairy tales.

It is difficult to learn an unfamiliar language. However, the lessons are enjoyable, while the sweets are delicious and the toys interesting.

At first, Paul and his wife came to Vietnam just to travel. But he later came up with the idea of teaching English after discovering that Vietnamese students’ writing in English is quite different from their speech.

After visiting some places, he decided to stay and teach English, with the focus on speaking skills rather than on reading and writing only.

The teaching of listening and speaking skills will allow students to understand native speakers and practice the skill of raising questions.

Paul has been to many provinces and cities in Vietnam. But he decided to stay in HCM City, because he realized that many poor children flock to the city.

“I don’t want to see any child not able to learn English just because they don’t have money,” he said, adding that he doesn’t have a plan to return to the US unless they have urgent affairs. He wants to see the children improve before deciding whether to return to the US.

Globalisation is driving multinationals across the world to review and innovate their production methods based on industry 4.0, experts said.