With a passion cherished since the childhood, Tran Nguyen Ba Phuoc decided to study IT and has since then won great achievements for himself and Vietnam.

In July, Phuoc, born in 1995, was chosen by the Vocational Education Directorate General as one of 10 Vietnamese 'first skills' ambassadors. 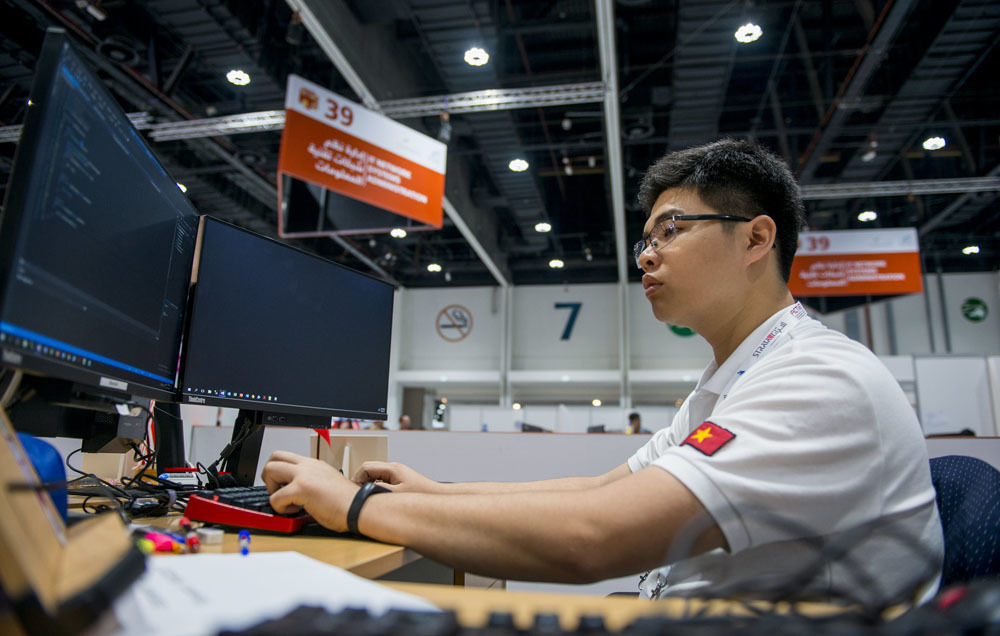 In 2017, he won the bronze medal at the 44th World Skills Competition 2017 in IT Software Solutions for Business, organized in Dubai.

His father is a cameraman who specialized in filming weddings and parties. Phuoc loved to see his father using computers to edit photos and make videos. With curiosity and eagerness, Phuoc asked his father to allow him to use the computer at the age of 15.

He used it to edit photos, learn how to use software and read the news. When the computer broke down, he tried to fix the problems. But the more he tried, the more serious the problems became. Thanks to the computer breakdowns, however, Phuoc learned more about computers, though he was scolded by parents.

When he was in the ninth grade, he was assigned to organize forums for the class, which made him more determined to study IT. Luckily, Phuoc had support from his parents. He decided to study IT at the HCM City University of Industry after finishing high school.

When he was a first-year and second-year student, he attended a lot of IT competitions. Though he did not win prizes at the competitions, he was able to have valuable experiences.

In 2016, when he was a third-year university student, Phuoc registered to attend the national contest, where he grabbed the gold medal. The questions for him were related to software for a marathon tournament.

After the national competition, he was interviewed by specialists who later chose members of the national team to attend the world’s skills contest.

At the interview, Phuoc was given a white paper with a black dot on it and was asked what he thought about the black dot.

“I said it was the image of a person (black dot) walking on a white snowy area. The black dot was what we knew, while the white area was what we still cannot understand. People must move forward to conquer knowledge and the unknowns,” he recalled.

After that, Phuoc and another man were sent to a training course in South Korea from July 2016 to September 2017, where he had memorable experiences. He later won the bronze medal at the world’s skills contest in Dubai in 2017.