A US-funded project on dioxin contamination remediation at Bien Hoa airport in the southern province of Dong Nai was launched on April 20. 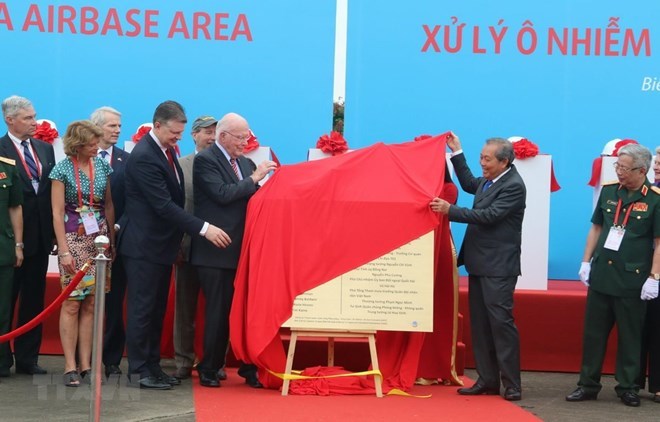 The launch ceremony, hosted by the US Agency for International Development (USAID) and the Vietnam Air Defence-Air Force Service, was attended by Permanent Deputy Prime Minister Truong Hoa Binh, visiting US Senator Patrick Leahy, who is Vice Chairman of the US Committee on Appropriations and other US senators who are on the Vietnam visit, the US Ambassador to Vietnam, among others.

According to the Vietnam Air Defence-Air Force Service, USAID and other competent Vietnamese agencies completed their assessment of dioxin contamination in Bien Hoa, where the US troops kept most of the toxic chemical used in the war in Vietnam, providing the fact that around 500,000 cubic metres of contaminated soil there need to be treated.

Following the assessment, USAID signed an agreement on the implementation of the first five-year phase of a project to resolve dioxin contamination at Bien Hoa airport with the Ministry of Defence of Vietnam in early 2018. The agency committed a funding of 183 million USD for the project, which is scheduled to last 10 years using the remediation methods used at Da Nang airport.

Addressing the event, Permanent Deputy PM Truong Hoa Binh hailed the US side for actively working to support the making of the project, especially the personal support of Senator Patrick Leahy and other US senators.

He said although the war ended years ago, dioxin consequences still linger, leaving huge impact on human life and the environment.

Accordingly, the Vietnamese Party and Government have defined that the settlement of post-war toxic chemical consequences is an urgent, humanitarian task, helping to protect the health and environmental safety for people and spur sustainable socio-economic development, he said.

He also noted the close coordination between relevant agencies of Vietnam and the US in activities to survey, assess, and resolve dioxin contamination and implement projects on healthcare and functional rehabilitation for people with disabilities in Vietnam.

These outcomes are initial but important to stepping up the comprehensive partnership between Vietnam and the US, he said, expressed thanks to the US parliament, government and people for working with Vietnam in addressing Agent Orange/dioxin consequences over the past years.

Deputy Minister of Defence Senior Lieutenant General Nguyen Chi Vinh said Bien Hoa airport is one of the areas with heaviest dioxin contamination with its 52 ha with over 500,000 cubic metres of soil need to be cleansed.

Vietnamese and US agencies estimate that the workload needs over 390 million USD, he said.

Located about 30 kilometres from Ho Chi Minh City, Bien Hoa, is a major base for US Army, Air Force, Navy and Marine units during the war.

Dioxin, a highly toxic chemical contained in the defoliant, stays in the soil and at the bottom of lakes and rivers for generations.

It can enter the food chain through meat, fish and other animals, and has been found at alarmingly high levels in human breast milk.

The chemicals have been linked to cancer, birth defects and other chronic diseases, according to Vietnam Red Cross.-VNA