Can Tho City takes steps to prevent erosion

The People's Council of Can Tho City has approved investment policies for four anti-erosion projects with a total estimated investment of nearly VND745 billion (US$32 million).

One of the new anti-erosion projects is an embankment worth VND223.4 billion ($9.6 million) along the O Mon River in O Mon District’s Thoi Hoa Ward.

Another embankment will also be built along the river section in Ô Mon District’s Thoi An Ward, with an investment of VND117 billion ($5 million).

A project worth VND195.8 billion ($8.4 million) will include a new embankment to protect erosion-prone areas near My Khanh Market in Phong Dien District.

A section of Provincial Road No 918 will be repaired and upgraded at a cost of VND208.3 billion ($9 million).

The capital for these works will be sourced from the Central budget, local budget and other sources.

Construction of the projects is scheduled to be completed in 2023.

Pham Van Hieu, chairman of the Can Tho City People's Council, has asked the city’s People’s Committee to complete procedures quickly for the projects and submit them to the Prime Minister for approval.

The city’s People’s Committee is requested to direct relevant agencies to implement the projects right after the central government disbursed capital, he said.

A river bank erosion caused the collapse of one side of Rach Cam Bridge into the Binh Thuy River, blocking traffic on Provincial Road No 918 in Can Tho City on June 10.

According to the city’s Department of Transport, a new Rach Cam Bridge will be built to replace the old one and is expected to be completed within two months.

On May 13, serious erosion occurred along Binh Thuy River over a length of 400m, causing two houses to fall into the river.

At least 17 erosion spots, covering a total length of 1,000m along the riverbanks, were recorded in the city by the end of May.

The erosion affected 37 houses and caused four houses of them to collapse into the river, with damage estimated at more than VND12 billion ($517,000).  VNS

Can Tho to build concrete embankments in eroded areas

The Cuu Long (Mekong) Delta city of Can Tho plans to build concrete embankments in some of the city’s eroded areas, according to Vo Thanh Thong, chairman of the Can Tho City People’s Committee.

Experts worry about the fate of Mekong Delta 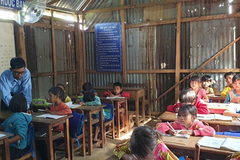