Class photo showing only one student without certificate stirs controversy

In a photo taken on the occasion of the closing of the academic year, students in one class can be seen holding high their certificates of merit except for one boy.

The photo caught the attention of the public after it was posted on the internet on July 9 because it ‘showed a lot of existing problems of Vietnam’s education’, one analyst said. 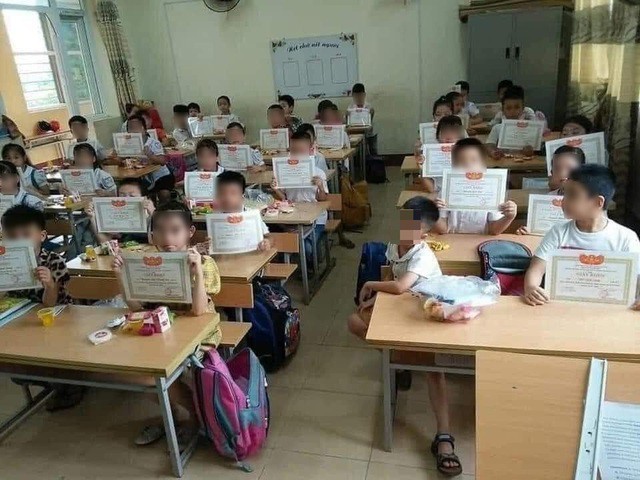 The photo has caught the attention of the public

Certificates of merit are given to students, mostly when an academic year finishes, to recognize their learning achievements.

“The photo once again shows the serious disease infected by Vietnam’s education – the ‘achievement disease’,” a member on an education forum commented.

‘Achievement disease’ is the expression used by Vietnamese to talk about the serious problem in which schools try to ‘fabricate’ achievements and do everything they can to gain high positions in emulation movements.

Analysts have recently discovered that the number of students recognized as good and excellent students has risen abnormally.

Local newspapers last year reported that 80 percent of students at a primary school got the title of excellent, while the remaining 20 percent were recognized as good students.

And a lot of students were found unable to read and write though they had fulfilled primary education.

In Vung Tau City, a parent was surprised that his son was recognized as excellent student though he could not speak one full sentence.

Netizens comment that the class photo is another proof of the ‘achievement disease’: tens of students, except only one, receive a certificate of merit.

The other problem of Vietnam’s education system that the photo shows is the lack of sensitivity.

“Imagine how the boy felt when he appeared in the photo as the only one who did not receive certificate of merit. I am sure he felt sad and discouraged,” said Le Quynh Hoa, a parent in Hanoi.

“I wish someone would tell the boy that the certificate won’t determine his fate and his future life. Let’s do something to reassure the boy and help him feel more confident,” Hoa said.

Duong Anh Vu, memory world record holder, in his article on zing.vn, commented that the photo of the sudent in the class who did not receive a certificate shows unreasonable thinking in society.

“This is an offensive non-educational photo and the person taking this picture is worth condemning,” he said. “However, thanks to it, I discovered many ridiculous thoughts that exist in our community."

Nguyen Huu Hop from the Primary Education Faculty of the Hanoi University of Education wrote an open letter to the student.

“I hope you don't feel sad because you didn't get a certificate. All of us are clever and I believe that you are clever too,” he wrote.

Some private schools have complained that it will be a ‘disaster’ if they cannot begin teaching before the new academic year opening day on September 5.