Coffee is a key crop in Kon Tum and other provinces in Tay Nguyen region, the country's largest coffee producer.

Kon Tum has been replacing old coffee trees since 2014 and has employed advanced techniques. It has also helped farmers buy coffee seedlings, fertiliser and pesticide.

His new trees have a yield of about 20 tonnes of fresh beans per hectare compared to a yield of 11 tonnes of the old coffee trees.

“The replanting has offered better efficiency,” he said.

The province has replanted more than 1,208ha of old coffee since 2014, according to its Department of Agriculture and Rural Development.

The province has 2,180ha of old coffee trees, including 1,430ha of robusta coffee and 750ha of arabica coffee, which need to be replaced to improve yield.

Farmers have replanted old coffee trees with new coffee varieties with high yields, good quality, and disease resistance. The TR4 variety, for instance, is harvested in the dry season, providing easy conditions for farmers to process.

However, irrigation projects provide water for only one part, leaving many coffee areas facing the threat of drought in the dry season.

Many farmers in recent years have been using drip or spray irrigation systems to save water.

Under the Vietnam Sustainable Agriculture Transformation Project in Kon Tum (VnSAT Kon Tum), many farmers have been provided 50 per cent of the investment costs to buy efficient irrigation systems.

The system, which cost VND90 million (US$3,900), can both irrigate and fertilise coffee trees at the same time as the fertiliser is mixed with the water.

Previously, he spent about eight hours irrigating coffee trees each time, but now spends only 40 minutes.

Kon Tum is facing drought, but his coffee orchard has developed well because it has sufficient irrigation water.

“The use of the system … has improved the quality of coffee as irrigation water and fertiliser are sprayed equally on the coffee trees,” he said.

The Israeli irrigation technology helps farmers save water and reduces fertiliser and labour costs, according to the VnSAT Kon Tum’s Management Board.

Farmers save 30 – 40 per cent of irrigation water compared to traditional irrigation methods, while coffee yield is improved by 15 – 20 per cent.  VNS

The Tay Nguyen (Central Highlands) region has replaced 118,202ha of old coffee trees by planting new ones or grafting old coffee trees with young sprouts to improve yield since 2014, or 98.5 per cent of the total area to be replanted in 2014-20. 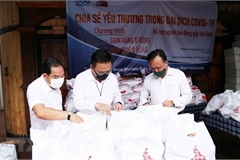