Ho Quang Buu, Chairman of Nam Tra My District in Quang Nam Province, has confirmed that they have enough Ngoc Linh ginseng seedlings for the monthly market. 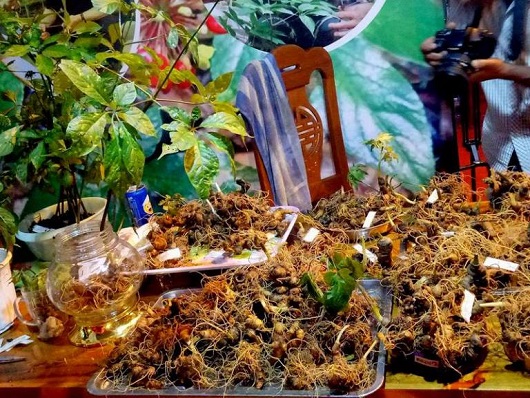 Ginseng was first found on Ngoc Linh Mountain on the border between the Central Highlands Kon Tum Province and Quang Nam in the late 1960s. Last year, Ngọc Linh Ginseng was granted geographical indication in Quang Nam and Kon Tum provinces. It is regarded as one of the five best ginseng species in the world.

Since 2017, the authorities in the central province of Quang Nam have organised a monthly market to promote Ngoc Linh ginseng as part of the project to make it a major local economic product. Since then, nearly one tonne of ginseng has been sold through 21 market sessions. Many people are worried that the ginseng seedling source will run out since it takes five to ten years for ginseng to mature to point where it can be sold.

Buu said ginseng, other herbal medicines and other products were available at the market. Six companies have also rented lands to cultivate ginseng in the area. Ngoc Linh Ginseng Company has rented over 20 hectares and Central Region Paper Company raises two hectares.

When being asked if it is true that Panax pseudoginseng are raised among Ngoc Linh ginseng, Buu said it was a rumour and they hadn't caught any evidence and the soil in Quang Nam Province may not be the best for Panax pseudoginseng. The police are investigating the case.

"I'm sure the market will last forever," he said.

According to the national product development programme for Ngoc Linh ginseng to 2030, about two million seedlings will be planted on 200 hectares of land and the infrastructure will be built and upgraded. From 2025, the farmland will be expanded to 30,000 hectares. Vietnam aims to produce 500-1,000 tonnes of ginseng per year, making it the world’s second top ginseng grower. Dtinews