Most of the winners of ‘Road to Olympia’ leave Vietnam for Australia where they study and stay after graduating.

“Duong len dinh Olympia” (Road to Olympia) is the longest running game show on Vietnam National Television. This is a competition held annually for high school students and the award for the winners of the competition is the full scholarship for studying at university in Australia. 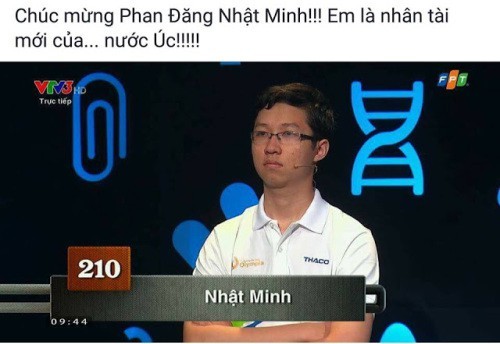 Phan Dang Nhat Minh, the winner of the 17th competition

“Road to Olympia’ has many other unofficial names – ‘Duong len dinh Australia’ (Road to Australia), or ‘Noi tuyen chon nhan tai cho Australia’ (Competition that selects talents for Australia). This is because most of the winners, the best students, now live and work and Australia.

On an education forum, people wrote sarcastic remarks, saying that ‘Road to Olympia’ needs to be removed, because it provides Vietnamese talents to Australia, and causes a brain drain in Vietnam.

The first champion of the Road to Olympia Tran Ngoc Minh, graduated from Swinburne University of Technology in Australia. In July 2013, local newspapers reported that she was working for a mobile network operator in the country.

The second champion, Phan Manh Tan, obtained a doctorate in Software Engineering, and is reportedly working for IBM in Melbourne.

The winner of the fourth competition, Vo Van Dung, is working for an audited firm in Melbourne.

Other winners also studied at the Swinburne University of Technology and now live and work in Australia. Only Phan Dang Nhat Minh, the winner of the 17th competition and the 2019 competition winner Tran The Trung, have not studied abroad.

Le Huu Lap, former deputy director of the Posts and Telecommunications Institute of Technology (PTIT), commented that young people want to seek the best working and living conditions. Many of them cannot find good conditions in Vietnam.

Nguyen Song Hien, a PhD student at Newcastle University in Australia said it would be better to raise the question whether the Vietnamese government is willing to make investment to attract talents from other countries.

Another question is that whether Vietnam’s education is capable of training talented students in the fields which require international standards.

According to Hien, many friends of his who obtained doctorate overseas returned to Vietnam and could not live on the modest salaries. And the working environment did not allow them to promote their ability. Therefore, they had to leave for Australia again.

The technology community several days ago was stirred up by the rumor that most of the development team of a large Vietnamese technology firm had left for another company, causing many key projects of the firm to be delayed.