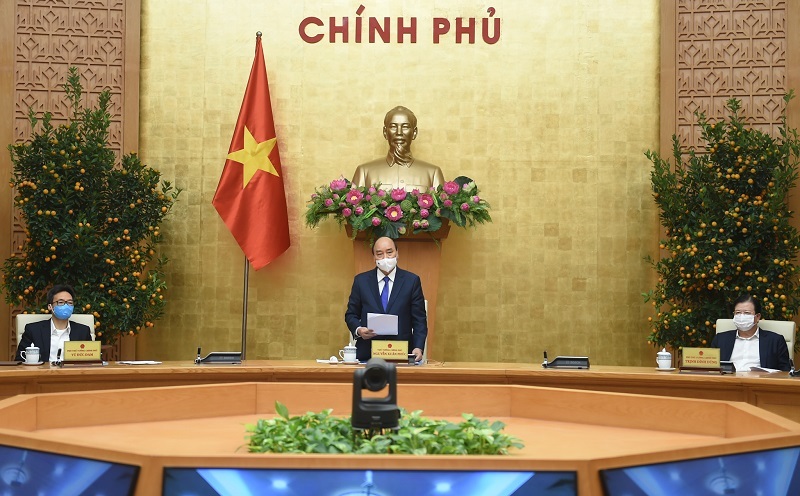 Prime Minister Nguyen Xuan Phuc wanted to listen from agencies and localities new measures to stop the outbreak of Covid-19 in Vietnam, especially when a number of infected cases found in Hanoi in recent days, including a Japanese man who was confirmed posthumously to be positive for the virus in his third test.

Mr. Phuc was making the request at an online conference held in Hanoi on February 15 with the participation of Government officials, representatives of the National Steering Committee for Covid-19 Prevention and Control, ministries and 26 cities and provinces.

Mr. Phuc said although agencies and localities have made many efforts, there are still existing problems that require more drastic actions to prevent the Covid-19 outbreak.

The Government leader and participants discussed about problems making public concerns, including vaccines – an urgent issue, social distancing in localities following the Government’s Instruction 16, and the cancellation of organizing festivals during Tet (Lunar New Year) holiday.

“Localities must to take drastic actions in implementing prevention measures and against Covid-19,” Mr. Phuc said.

Minister of Health Nguyen Thanh Long said in the past 16 days, 12 of total 13 cities and provinces were seen decrease in the number of newly-infected cases, excepting for the northern province of Hai Duong, where is currently the Vietnam’s Covid-19 hotspot.

“The outbreaks in these provinces and cities have been basically controlled,” said Mr. Long.

The minister said the outbreak in Hai Duong Province is relatively serious, with 10 out of 12 districts having cases of infection. Almost the districts have basically controlled the spread but Cam Giang district alone is seen being complicated as it has a large industrial park with 60,000 workers who have travelled crossing localities.

He said the Ministry of Health and localities have actively and drastically implemented prevention measures. However, the risk of spread is still very high, especially in big cities like Hanoi and Ho Chi Minh City, where there is only one day left until the end of Tet, all agencies, factories and people will return to work.

Chairman of Hanoi People’s Committee Chu Ngoc Anh said the city’s entire political system has been activated with all stages of tracing, zoning, sampling and testing, keeping up the situation and controlling the oubreak. “F0 and F1 cases have been managed and quarantined in centralized isolation sites.”

“The city has conducted the tracing drastically with support from more than 10,000 community monitoring teams and local police to ensure safety for residents,” Mr. Anh said.

As for the case of the Japanese man who was confirmed posthumously to be positive for the virus on February 14, Mr. Anh said Hanoi has taken all 296 samples of guests and staff of Somerset West Point hotel where he stayed, giving negative results.

Relevant to his travel from Ho Chi Minh City to Hanoi, Mr. Anh said the city also quickly sampled all employees of Noi Bai International Airport in one day and night with 12,302 samples, giving negative results. “We are still investigating and tracing cases related to him.”