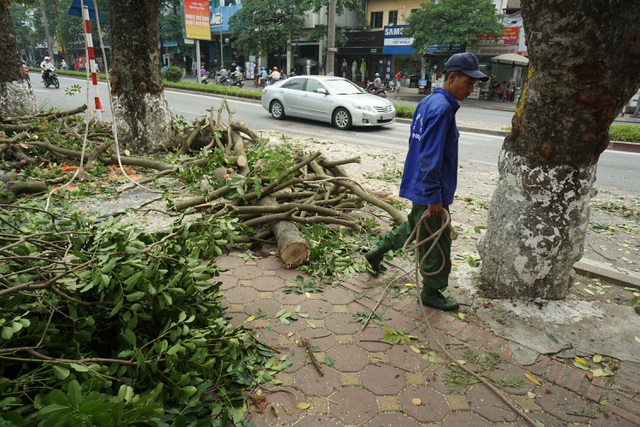 106 trees that used to provide shades along Kim Ma Street were moved to a garden in Gia Lam District when Nhon-Hanoi Railway Station Project was started in October 2016.

However, they are being left idle without any carer. Over 30 trees have died and many others are drying out. They are large trees including dry zone mahogany and chinaberry tree.

The representative of Beepro Company, who was assigned to relocate and take care of the trees by Hanoi authorities, can't be contacted. Nguyen Van Hung, owner of the rented garden, said after renting his 3,000-square-metre land, Beepro only hired two employees to take care of the trees for four months. Hung said he hadn't seen anyone since then.

The land was rented for two years but Beepro only paid for the first year before they disappeared, leaving behind the trees a debt of VND150m. Hung said the contract ended in 2018 but he didn't know what to do with the trees to take back the land since the trees are under the management of the city.

Even the address listed on Beepro's website is fake. According to the company's map, the actual location is only an empty land on Pham Hung Street.

In the contract with Hung, Beepro's address was listed at 20A, Alleyway 177, Phung Khoang Street. However, there's no Alleyway 177. The locals also confirmed that there's no Beepro company but only a hair salon at house 177. Dtinews

Thousands of trees torched along Highway 18

Police are looking for suspects after thousands of trees along part of Highway 18 were burnt down.

People in Nam Tu Liem District of Hanoi were surprised about mysterious appearance of stolen trees.

Some 30.8 million employees aged over 15 in Vietnam had been left reeling from the coronavirus pandemic by June, with roughly eight million being laid off or having their working hours reduced and 17.6 million given salary cuts.

No new cases of COVID-19 were reported on July 4, leaving the total number of confirmed cases at 355, according to the national steering committee for COVID-19 prevention and control.

Vietnam’s most critically ill COVID-19 patient has recovered well and is now in good enough health to be flown back home to the UK on July 12 as per the request of the UK Embassy in Vietnam.

Villas and architectural works built before 1954 in Hanoi will not be licensed for renovation and repair in the near future.