HCM City authorities on Tuesday promised enterprises that they would continue to support enterprises amid the COVID-19 pandemic, and would speed up major projects that have been delayed for years.

Speaking at a meeting to review the economy of the first four months of the year, he told the Department of Home Affairs to set up a working group to help remove barriers for enterprises, especially those related to administrative procedures.

“If the problems are caused by a central agency, the city will work with the central Government to remove them. Every week, I receive hundreds of complaints from businesses about prolonged procedures, causing project delays,” he said. “The delays cause serious damage to businesses as they have to pay bank interest every day.”

“The head of any agency that causes the delay in administrative procedures must be fully responsible,” Phong said.

He said the fight against the outbreak remains the top priority, adding that the city would focus on achieving its “dual goal” of containing the Covid-19 pandemic and reviving the economy the rest of the year.

The Department of Health has been asked to prepare a prevention plan for the fourth wave of the outbreak.

The city also plans to build field hospitals and increase testing capacity of up to 15,000 samples a day.

The city is strengthening pandemic control at airports, railways, roads and waterways. It has re-established checkpoints equipped with devices and border guard command forces to ensure COVID-19 control at city gateways.

It will also continue to implement solutions to support the private economy, and encourage the formation of highly competitive corporations and enterprises in the region and the world.

Phong asked all agencies to continue to promote e-commerce and the digital and sharing economy, especially amid the difficult conditions caused by the pandemic.

Speaking at the online event, Le Thi Huynh Mai, director of the Department of Planning and Investment, said the city’s total retail sales of goods and revenues from consumer services in the first four months was up 7.9 per cent year-on-year.

Since the beginning of the year, 5,588 businesses have resumed operation, up 95.18 per cent year-on-year.

The index of industrial production (IIP) in the first four months increased by 9.7 per cent over the same period, which is a positive sign of economic growth, according to Mai.

Nguyen Thi Hong Ha, director of the Department of Finance, noted the clear signs of recovery in the first four months as the total state budget revenue was estimated at more than VND140 trillion (US$6.08 billion), an increase of 15.76 per cent over the same period last year.

Le Duy Minh, director of the city Tax Department, said the city is likely to achieve revenue targets for the year based on the positive results in the first four months.

From now to the end of the year, the city will continue to support businesses by extending tax payments worth a total of VND15 trillion ($650.2 million) for 56,000 organisations and individuals, including 34,000 businesses. 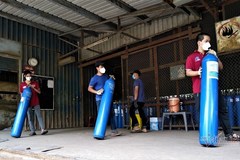