The second support package worth VND886 billion (US$37.8 million) will be directly given to HCMC dwellers who have been affected by the coronavirus epidemic.

This news was announced at today's press brief organized by the Ho Chi Minh City People’s Committee about the second support package for people hit by Covid-19 as per the city People’s Council’s resolution No. 09.

Speaking at the press conference, Vice Chairman of the city People's Committee Vo Van Hoan emphasized that the support package demonstrates the city government’s responsibility to dwellers who have been affected by the Covid-19 epidemic.

Furthermore, the relief payments have shown the city administration’s attention towards laborers, freelancers, and the poor in society. Mr. Hoan noted that the timely merit payment must be put in place to ensure the transparency of the implementation, make sure that there would be no fraud, and that the support will go to the right people.

Within seven days after receiving the dossier, competent agencies in the southern metropolis will carry out appraisal and approval and the support money will be given directly to an employee's personal account without delay. Anyone who does not have a bank account will receive in cash.

Regarding the implementation time, Vice Chairman Hoan said that the support package will start in July 2021 and will end in August. Authorities will pay through personal accounts of food street vendors; scrap collectors; workers who load and unload goods by tricycle, rudimentary vehicles, lottery ticket vendors; self-employed owners of household eateries, accommodation, tourism, healthcare establishments; those working in the sectors that must be temporarily suspended under the direction of the People's Committee such as amusement parks, entertainment venues, tourist attractions, monuments, museums, libraries and sports centers.

Traditional motorbike taxi (xe om) drivers will also receive money as they are freelancers who lost their livelihoods due to the coronavirus epidemic.

According to Director of the municipal Department of Labor, Invalids and Social Affairs Le Minh Tan, there will be six groups of people who are eligible for the VND886 billion relief payments.

Specifically, concerning meal support policy, those who must be under medical isolation will receive VND80,000 each person a day. At the same time, those participating in the prevention and control of the Covid-19 epidemic fight each will be given VND120,000 daily.

Each employee with labor contracts temporarily taking unpaid leave will receive VND1.8 million. Particularly for pregnant female employees will be eligible for a monthly allowance of VND1 million each. Parents of a child under 6 years old will be supported with VND1 million per month.

Unemployed workers who are not eligible for unemployment-related benefits would access a monthly allowance of VND1.8 million. Pregnant women will have an additional sum of VND1 million in addition to VND1.8 million.

Freelancers without labor contracts in all sectors who lost their jobs in the coronavirus epidemic will be handed over VND50,000 per person a day during the social distance as per the Prime Minister’s Directive 15.

Household businesses who must close the door following the Prime Minister’s Directive 16 in districts 12, Go Vap and restricted areas will receive VND2 million each.

Some 60,000 traders in traditional markets with stalls, tax identification numbers in the city each will receive VND150,000 - VND300,000 a month. They will receive support for six months from July 2021 to the end of December 2021.

The Ministry of Labour, War Invalids and Social Affairs (MOLISA) is collecting opinions from ministries and agencies to complete a draft resolution on policies to support labourers and businesses impacted by the COVID-19 pandemic. 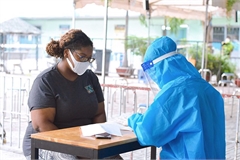