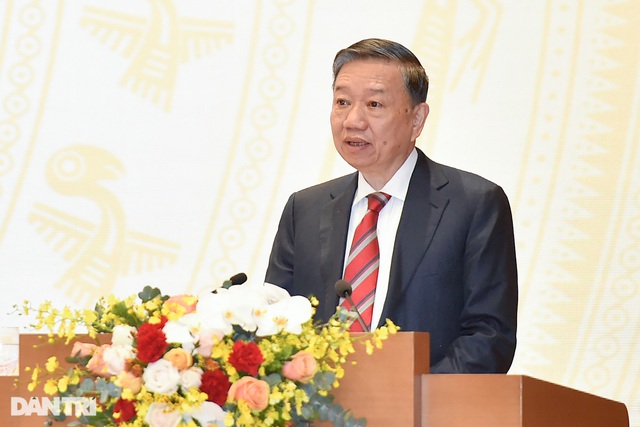 Minister of Public Security, To Lam speaks at the meeting.

Speaking at an online government meeting held on December 29, Minister of Public Security, To Lam, said that as Tet nears more Vietnamese have been found illegally returning to the country.

"Hundreds of people are being caught while crossing the borders illegally every day," he said.

The minister asked provincial authorities to tighten measures to curb the problems to prevent the spreading of coronavirus from foreign countries.

According to the official, more than 70,000 Vietnamese people have been brought home from abroad for Covid-19 prevention on repatriation flights organised by the government so far this year. And hundreds of thousands of other people have registered to return home at the end of the year.

"The life of many Vietnamese people in virus-hit areas abroad is currently very difficult," Lam said. "Many people want to return home, especially during the Tet Holiday. The number of people living and working in some neighbouring countries including Laos, Cambodia, Thailand, and China are big. Many of them are managing to return illegally across the border."

Minister Lam said that so far this year Vietnamese police have dealt with some 14,000 people who were found entering the country illegally."

The Ministry of Defence will ahead with camera installation along border areas to minimise illegal border crossing during the on-going Covid-19 pandemic.

The information was given by Major General Le Quang Dao, Deputy Commander and Chief of Staff of the Border Guard.

According to Dao, from now to the Lunar New Year 2021 which falls in mid-February, the weather in Vietnam would be quite favourable for coronavirus. During this time, more Vietnamese people are likely to want to return home. Many would try to enter Vietnam illegally to avoid being quarantined.

The Vietnamese Border Guard is monitoring around 5,000 kilometres of land borders, and a maritime border of some 3,000 kilometres. Rough terrain and severe weather conditions make monitoring difficult.

The border force will tighten control over the entry and exist in border areas from now to the late year.

A man in the Mekong Delta's Vinh Long Province recently tested positive for Covid-19 after illegally entering Vietnam through a border gate in Tay Ninh from Cambodia. He then went through some localities, including Ho Chi Minh City.

To date, two other people who took the same car with him, also tested positive for the virus, one in HCM City and the other in Dong Thap Province. Dtinews

A hotpot restaurant and a karaoke bar in HCM City have been locked down after a 23-year-old man tested positive for coronavirus, linked to a previously reported patient that entered Vietnam illegally on December 24.