The approaches making up traditional medicine including acupuncture, physical therapy, and herbal products have been used by many people. 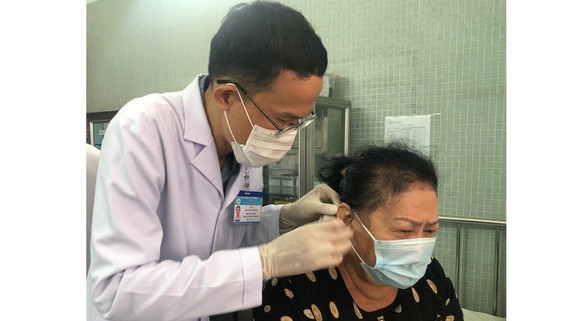 A 63-year-old man in District 12 Nguyen Van My arrived in the Ward of Traditional Medicine in Thong Nhat Hospital for treating complications of cerebrovascular accident that makes him left-sided paralysis. After a long time of treatment, he was discharged from the hospital as his illness abated.

He said; “Presently, my paralyzed left side is better and I can hold slight items and walk without my relatives’ assistance ; however, I am taking physical therapy to get better. In addition to taking herbal drugs, he is using acupuncture to relieve discomfort and sauna, massage.

A 67-year-old woman in District 3 Nguyen Tuyet Nhung also decided to follow traditional medicine after she suffered paralysis as a complication of stroke. She shared young people can take western drugs but she can’t because the drug will badly affect her liver and kidney if she uses for long time.

Therefore, she has been taking traditional medicine, massage, acupressure points and physiotherapy in the medical center in the district.

Subsequently, she can now walk with a walking cane.

The most wonderful effectiveness of traditional medicine is that the medicine can improve the condition of a five-year-old girl with cerebral palsy due to disruption of oxygen supply during or around the time of birth.

The girl in District 2 couldn’t roll over but lie still when she was nearly five years old. Her parents have taken her to many infirmaries for treatment but all to no avail.

When knowing that the Traditional Medicine ward in the Hospital in District 2 can treat the illness by traditional medicine, her parents took her three as last resort. It was a total miracle that after 10 months of treatment, the baby can roll over and sit. Everyday, the baby is taken to the ward where physicians massage and do acupressure points to stimulate her muscle nerve.

According to Dr. Musa Hanipha, Standing Deputy Chairman of the Traditional Medicine Association in District 5 said that not only easterners but people in the world started to use herbs as medicine or follow traditional medicine.

Head of Thong Nhat Hospital’s Ward of Traditional Medicine Dr. Nguyen Van Dan said that integrating traditional medicine into modern healthcare will benefit patients much. Doctors use scan machine and X–ray to diagnose patients’ illness and later they will use oriental traditional medicine for treatment.

According to the WHO, 65–80 percent of the world's healthcare practice involves the use of traditional medicine, commonly referred to as complementary and alternative medicine, in some way.