Many long-haul truck drivers have been found parking their vehicles and sleeping along the HCM City-Trung Luong Expressway, causing traffic disorder and posing a risk of traffic accidents.

Although agencies have patrolled and fined violators, the situation has not improved.

Nguyen Van Tung, a driver from southern Tien Giang Province, told Tuổi Trẻ (Youth) newspaper that he was driving on the expressway at 3am on August 8 at 100kph when he suddenly slowed down and changed lane to avoid a row of trucks parked on the right side of the road.

Tung said he was a transport service driver, so he often drove on this route at dawn.

“Each time I drive on the route, I have found many truck drivers parked on the emergency stopping lane to sleep in their cabins. Many have even encroached the primary lane and ignored the safety of themselves and other people,” he said.

Most have chosen to park their vehicles at the route passing Ben Luc and Tan An districts and near the rest area of the expressway.

Some drivers claimed they needed to take a rest so they could deliver the goods early the next morning.

A truck driver from southern Ca Mau Province, who wished to be anonymous, said he had been fined by traffic police for parking on the passing lane of the expressway for a nighttime nap, but he had no other option.

He said the delivery time in HCM City was in the middle of the night, so he was really tired when driving back to Cà Mau Province.

“It’s really dangerous to drive when sleepy as it will easily cause accidents. Moreover, there is no safe place to park the truck except for the expressway,” he said.

“There is a guardrail along the route as a way of protecting my vehicle from being robbed,” he added.

Le Vinh Phuc, head of the Ministry of Transport’s Road Management Department, said illegal parking on the highway for a nighttime nap has been a problem since early this year.

The department has installed traffic signs to ban drivers from parking along the route.

Some 1,000 violations have been detected over the past four months.

According to truck drivers and transport companies, the cause of the situation was a shortage of rest areas along the expressway.

There was a serious shortage of rest areas along the major national highways. The quality of rest areas was low with high prices and poor food service.

Hung said he transported cargo from HCM City to Kiên Giang Province. There was only one stop near the HCM City-Trung Luong Expressway during the more than four-hour trip.

There were many restaurants along the route, but there were not many parking places at them, especially for large trucks.

More rest areas should be built along the route, he added.

Tran Phuc Loc, director of a transport company in HCM City, said most drivers illegally parked on restricted lanes or on the edge of the roads for a rest.

However, this posed high risk of traffic accidents and many collisions between vehicles in use and parked vehicles have occurred.

Loc said his friend stopped his truck on the edge of the National Highway No1 to take a quick rest on his route from HCM City to southern Ca Mau Province, before a drunken motorist crashed into the truck. The motorist died on the scene.

His friend had to compensate the victims’ families for illegally parking on the highway.

Loc said authorities needed to build more rest areas along the highway, especially at the two ends of highway. This would help reduce the risk of traffic accidents.

Pham Cam Thuy, a representative of a private-invested rest area at the HCM City-Trung Luong Expressway, said the rest area was under construction and would be open in the next two months.

Nguyen Van Thanh, director of the Directorate for Road of Viet Nam’s Road Management Unit No4 agreed that most of the rest areas were too small.

He cited the two rest areas along the HCM City-Trung Luong Expressway as an example. The two, which were allowed to operate by the Ministry of Transport, are too small for trucks to park.
He said investment in rest areas was badly needed.

The HCM City-Trung Luong Expressway is the only route connecting the city and the southern provinces Tiền Giang and Long An.The 62-km route was open for traffic from February, 2010. The speed limit is 120kph.

Currently, there are two rest areas on the route. 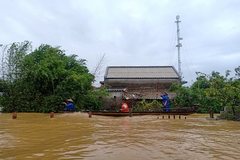