They say there's no place like home, but some people may be too much into home comforts for their own good.

Local border guards discovered the fishermen on the evening of August 3 at Lang Co Township and brought them to a quarantine a day later, the Thua Thien-Hue Province Border Guard Command reported.

The six fishermen live in Loc Dien Commune, Phu Loc District. They left their hometown to work as crew for a fishing boat in Da Nang.

Because of storms, fishing boats could not go to sea, so the fishermen decided to return home.

However, amid the COVID-19 outbreak in Da Nang, authorities in Thua Thien-Hue set up checkpoints to prevent people from pandemic-hit areas entering the locality without reporting their health status. VNS

Borders are under strict control to prevent spread of COVID-19 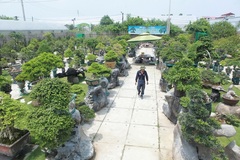