Winners of the 15th National Press Awards in 2020, the noblest award for journalists in Vietnam, were announced at a ceremony on October 24 night in Hanoi.

Addressing the event, President Nguyen Xuan Phuc lauded the great contributions that journalists have made to the country, and congratulated the awarded journalists.

He underlined that the press is a sharp tool to fight corruption, wastefulness and negative phenomena as well as the degradation in morality and lifestyle, and at the same time provide the public with timely information and directions from the Party and State, thus contributing to creating social consensus, and promoting joint efforts in dealing with difficulties and challenges facing the country in the development path as well as the protection of national independence, sovereignty and sacred territorial integrity, and enhancing the position of Vietnam in the world arena.

At the same time, the press has proactively rejected distorted and wrongful information against the Party, State and the national construction and defence cause of Vietnamese people, he stated.

The State leader stressed that the Party and State always want and require journalists to maintain their political mettle and constantly improve professional capacity and ethics.

This year, 112 outstanding works were honoured, with one Special Prize, nine A prizes, 25 B prizes, 45 C prizes, and 32 consolation prizes presented.

VietNamNet's series "Vietnam press agencies join hands to 'clean' themselves", with five articles, won the A Prize. This is the highest award that VietNamNet has received in its 24-year history.

Along with honouring outstanding journalists and press works, the National Press Awards also affirms important contributions that the press makes to national development and the values of the Vietnamese revolutionary press. 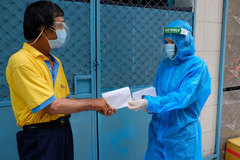